Share All sharing options for: Rockies 17, Giants 8: Baseball is Weird.

Thirteen runs crossed the plate in the first four innings of this game. Seven Giants runs came in one inning. The Rockies responded an inning later with seven more of their own. Yeah, folks, it was that kind of baseball game.

The early innings hinted at an evening of Rockies domination, as the team torched Tim Lincecum after he returned from his visit to the local barber. Six Rockies runs in the first three innings knocked Lincecum out of the game after just two and a third innings pitched, while Jeremy Guthrie cruised along. The fourth inning marked a dramatic change in momentum. After allowing back to back home runs to Nate Schierholtz (one of two on the night) and Brandon Crawford, Guthrie lost his composure on the mound and would only be able to retire one of the next five batters before being relieved by Matt Reynolds. After a walk to Gregor Blanco, Reynolds allowed a two run single to Hector Sanchez. A sacrifice fly from Schierholtz in his second at bat of the inning gave the Giants the lead and capped off a seven run fourth inning.

The Rockies offense wasn't phased though, and came back to continue the pattern of scoring during every inning. The Rockies re-tied the game when Marco Scutaro Scored on a Carlos Gonzalez groundout off of Giants reliever Guillermo Mota. Troy Tulowitzki singled in Dexter Fowler to regain the lead. After a much better second inning pitched for Reynolds, the Rockies put up their biggest inning of the game, a seven run fifth inning that featured one of the most absurd plays I have ever witnessed. With Todd Helton and Michael Cuddyer on based. Ramon Hernandez singled off of former Rockie Jeremy Affeldt. Helton scored easily, but the ball reached the infield before Cuddyer could cross the plate, and he was held up. Being chased by a lumbering Pablo Sandoval, first baseman Brett Pill, who was covering the plate, dropped the ball on the throw, allowing Cuddyer to score. Hernandez broke for third during the play, and with some clever arm maneuvering and a lot of luck, managed to evade both tags from Crawford. After the inning, the Rockies led 16 to 7.

Matt Belisle and Tyler Chatwood (who earned a three inning save) wrapped up the game on the mound. The final four innings of the game were generally quiet, featuring one additional run for each team after the fifth. Gonzalez led the overall charge offensively with a three hit night that included two tripled and four runs batted in. Fowler, Nelson and Helton also had three hit games, as did Cuddyer, who hit three doubles. Every position player with an at bat scored a run, and all sans Scutaro got at least two hits, including Eric Young Jr. who knocked two pinch hits in the seven run fifth, including a triple. The Rockies managed 22 total hits, none of which were home runs. Yay for better looking batting averages going into tomorrow! Hopefully we still remember how to score runs.

*wipes brow* That was an exhausting game to recap. And watch. Tune in tomorrow as the Rockies try to get back to .500, as Jamie Moyer takes on Madison Bumgarner. 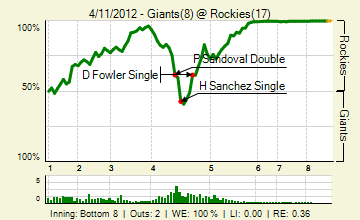