Rockies 8, Padres 4: Tulowitzki or Not, Doubles Lead Rockies Back to .500

Share All sharing options for: Rockies 8, Padres 4: Tulowitzki or Not, Doubles Lead Rockies Back to .500

Starting pitcher Juan Nicasio picked up his first win of the season in this generally well played game of "based ball", despite all the efforts of Chase Headley. The San Diego third baseman knocked two home runs off of Nicasio in the game, including a first inning shot that continued the trend of the Rockies falling behind in the first inning. Thankfully that home run was surrounded by three easy groundball outs, keeping Nicasio in proper form for the rest of his six and a third innings in the game.

Esmil Rogers continued his positive stretch in the Rockies' pen. After a walk and a wild pitch that allowed a run entering the game, Rogers kept the ball on the ground and further damage was prevented in his inning and two thirds on the mound. Matt Belisle finished the game cleanly, and the Rockies bullpen is sure to breathe a sigh of relief with an off day tomorrow. So is Michael Cuddyer's sore toe.

The Rockies offense was fond of second base tonight. Seven of their twelve hits were doubles, including two from third baseman Chris Nelson, making his placeholding for Nolan Arenado a lot more tolerable than people feared. Most of the Rockies offense occurred in the second inning. After Nelson doubled in Wilin Rosario (who has also been heating up lately), Jonathan Herrera lobbed a home run over the right-center field fence into the Rockies bullpen. Doubles from Marco Scutaro, who shifted over to shortstop with Tulowitzki taking a rest, and Dexter Fowler continued the inning. Always nice to see production from the top of the lineup.

An all around well played, average baseball game, something we have seen very little of this season, what with the rainy walkoffs, seventeen run launch-fests, 49 year old pitchers winning baseball games and Barry Zito shutouts. The Rockies need to play more games like this if they want to continue the push forward. After disappointing series losses to Houston and San Francisco to begin the season, the Rockies have won their second series in a row and look to take this momentum onto the road to Milwaukee. I am hoping that positive signs from a starting pitcher coupled with consistent offense from around the lineup settle down the local mob and let us all have at least one day of peace on Purple Row.

So, am I the only one that really wants to see a Matt Belisle/Orlando Hudson staring contest? 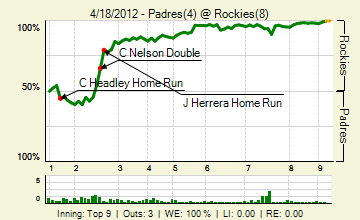