Every bullpen and every reliever blows games and puts up stinkers. It is never a good time to do so. It always stings. Tonight was one of those nights, and Jim Tracy managed it fine.

The Rockies' skipper gave the ball to lefty set-up man Rex Brothers in the 7th, up 2-1. He came into the game with a 1.59 ERA and a 2.75 FIP, so even though he struggled on Sunday, Brothers has been good this season. The southpaw fireballer fell behind hitters, grooved fastballs, and turned a 1 run lead into a 1 run deficit.

Jim Tracy turned to Matt Belisle in the eighth inning after the Rockies 4-3 lead. Belisle had retired 23 of the 24 batters he faced. He right hander fell behind hitters, grooved fastballs, and turned a 1 run lead into a 1 run deficit. Belisle surrendered a home run to Clint Barmes, a walk, misplayed a routine bunt into an error and gave up a two out tie-breaking single to Casey McGehee.

The Rockies' offense sputtered most of the night, with Carlos Gonzalez' emergence being the only contribution. The Rockies' left-fielder hammered a high fastball out to left in the first for his first homer of the season, then fired an outside fastball over the wall in left-center to the Rockies bullpen in the 8th. Both home runs drove in two runs.

Jamie Moyer was splendid again, working six strong innings and allowing just one run. He struck out three, walked three and induced 11 ground balls. His ERA is now sitting at 2.28.

Clint Barmes continues to confuse. As a Rockie, I always wondered how teams could fail to read scouting reports and let him burn them on the only pitch he can do damage with - the inside fastball. Barmes went ahead and burned his former team - three times - on that exact pitch. He had four hits on the season coming in, and two doubles and a homer tonight alone.

This one stings. It hurts to lose a game you led most of the game. On the road. Against an inferior team. When Jamie Moyer pitched well. But it happens. Nothing to do but wash it off and move on. The Rockies are 2-2 on the road trip and still can have a 3-3 or 4-2 road trip.

Cargo says:" I got you carbombs right here 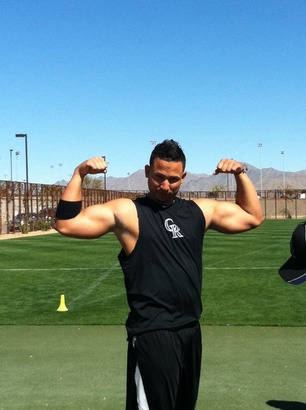