Despite being no hit by James McDonald into the seventh inning, an incredible start from Juan Nicasio kept the Rockies in position to win the game once they got their chance. The game was scoreless until Carlos Gonzalez scored on a Jason Giambi sacrifice fly, right after Troy Tulowitzki broke up the no-hitter with a single off the glove of third base Pedro Alvarez. The Rockies were unable to bring any more runs across. Nicasio allowed a solo home run to Alvarez in the bottom of the inning, tying the game back up.

The Rockies took the lead the following inning on another sacrifice fly, as the speed of Eric Young Jr. from third base turned a shallow pop out to right field from Tyler Colvin into the game winning run. Young had reached on a hit by pitch, and as Gonzalez had reached the previous inning on a walk, the Rockies manufactured both of their runs entirely without hits.

Esmil Rogers also attracted attention, striking out the side in the bottom of the eighth so that Jim Tracy could lessen the pressure on Rex Brothers and Matt Belisle, both coming off poor outings, of possibly having to throw in both games. Rafael Betancourt picked up his sixth save of the season, and Matt Reynolds, who faced one batter to end the seventh inning, secured his second win of the year. Nicasio allowed all nine hits to the Pirates, but only Alvarez' home run caused a runner to cross the plate. Always nice to see the Rockies find a way to capitalize on a game in which they are outhit.

The slow offense continued into game two, but this time, the Rockies weren't lucky enough to be in a position to strike back. A frustrating five run Pittsburgh fifth inning cemented the Rockies in concrete. With a bright sun shining straight into Carlos Gonzalez' face, the outfielder missed two catchable fly balls, including a RBI single from Andrew McCutchen. Starter Jhoulys Chacin was unable to move past it, giving up back-to-back home runs to Garrett Jones and Pedro Alvarez, who had also homered in Game #1.

A Ramon Hernandez home run in the seventh was the only run the Rockies would score in the game, mirroring Pittsburgh's performance in Game #1. Zach Putnam made his Rockies debut in the sixth inning, while Rex Brothers showed a return to form in the seventh. Beyond those positive qualities, there is very little more to say about this disappointing game.

The Rockies lose their first series since the home series against the Giants, and will return home to face the Mets beginning with a game on Friday. Tune in then! 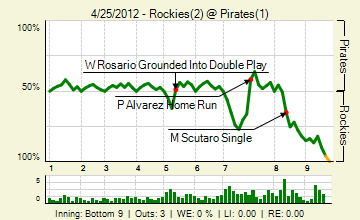 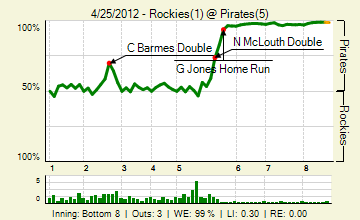