I was going to try my hardest not to be angry about the Rockies losing the first series of the season. After all, this team is supposed to start slowly, right? But, then I remembered who the Rockies played during this series. A team that, even with all of my baseball knowledge, I could only name about half of heading into the season. A team that's widely considered to be THE worst in baseball, with very few people picking them to lose anything less than 100 games.

A meltdown by Rex Brothers and the defense, combined with a frustratingly terrible day at the plate, sealed the Rockies fate as they did the unthinkable - even for a team this historically bad on the road - and lost their season-opening series to the Houston Astros. Perhaps the worst part of the loss wasn't that the team leaves Houston with a losing record; it's that Juan Nicasio pitched brilliantly and won't get rewarded for it.

Nicasio went seven innings in his return to meaningful game action, allowing just a run on five hits and a walk, while striking out four batters. Nicasio was under control, his stuff was good, and his mind seemed right - and the results showed it. He didn't get squared up many times, and his fastball snuck up on Astros hitters all afternoon. Unfortunately, he didn't have much of an offense behind him - an issue that plagued the Rockies for the majority of the series. The Rockies were only able to muster up five hits, and they weren't exactly strung together, either. Still, they held a 2-1 lead heading into the eighth inning on the strength of a two-run bomb off the bat of Wilin Rosario.

One run leads are hard to hold in the game of baseball, though, and Brothers showed it, despite setting down the first two batters of the eighth inning with relative ease. He allowed a base hit to Jose Altuve, then JD Martinez sent a shot back up the middle that knocked Brothers' glove off, and he was unable to gather himself in time to make a play. Carlos Lee sent a squibbler in the direction of Jordan Pacheco, who made a poor throw which allowed Altuve to score from second. Then, still with two outs, Brian Bogusevic, who is becoming a bit of a Rockies killer, slapped a base hit into right field to score Brian Bixler, who pinch-ran for Martinez, which gave Houston the lead. It can be argued that Brothers shouldn't have been allowed to face Martinez or Lee, but hey, I'm not the manager.

The Rockies looked destined to answer back in the ninth, as Michael Cuddyer led off with a double. However, Rosario, as good as he looked at times today, had another bad at-bat, striking out for the first out of the inning. Ramon Hernandez pinch-hit for Jonathan Herrera (who had no business being in the lineup today), and grounded out for the second out. Todd Helton drew a pinch-hit walk, but Tyler Colvin was unable to extend the game from there, grounding out to end the ballgame. 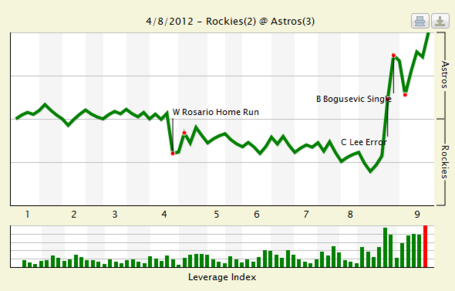 Although the stars didn't produce today, Jim Tracy needs to be saddled with some of the blame for today's loss. In addition to his bullpen blunder, I don't know how many times Herrera is going to be allowed to do nothing offensively before somebody figures it out. And although Dexter Fowler has struggled, he brings a dynamic that Colvin does not necessarily have. Questionable decisions all around...

Tomorrow is a new day, as the Rockies open at home with the San Francisco Giants. The Giants have provided us Rockies fans with some awful memories over the last two seasons, so hopefully that doesn't continue. As long as the manager gives the Rox the best chance to win, it should at least be a good one to watch.