Share All sharing options for: NL West Report: Are the Giants Unlucky?

Who has the best offense in the NL West right now? You might not know the numbers, but checking the standings, you might assume it is the Dodgers. By wRC+ or OPS+, you would be right. Who is next? The Rockies are a safe option, and indeed, their 95 wRC+ is second only to the Dodgers in the division. There is another team with a higher OPS+ than Colorado though...and that is the San Francisco Giants.

While you weren't looking, the Giants' offense has been quietly improved in 2012. Their 96 OPS+ actually ranks 5th in the National League, though their on base woes leave their wRC+ at a more familiar 88, good for 12th. Their .257 batting average is 6th in the NL despite their home park, and their .692 team OPS is above league average. Why is no one noticing this improvement?

The runs still aren't coming. While their 126 tallies are good for 11th in the league, a solid improvement over being dead last in 2011, it is still far behind what their standard rate stats would suggest. Simply, the Giants have not been producing with runners in scoring position. It would be easy to say a bad offense would be expected to be bad with runners in scoring position as well, but because I am insane, I dove deeper. 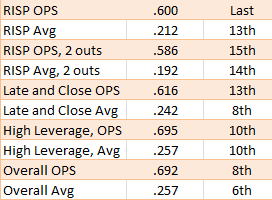 Without fail, the Giants have been below league average at the plate when the game is most on the line. This comes from an offense that hovers near league average overall, meaning an above average low leverage offense has been shrinking under pressure.

We could spin a narrative to fit this. The lineup is filled with underseasoned youth, minor league free agents, and veterans with inconsistent track records. With the knowledge that runs are already at a premium historically with the Giants offense, maybe there is some whiteknuckling going on. We would see more strikeouts and less controlled at-bats. This can be deduced at least partially from statistics.

I have not watched the Giants offense at work as Giants fans have, but this would not appear to be the case. San Francisco actually owns the National League's lowest strikeout rate. Yet they have actually struck out less frequently with runners in scoring position than without. We would not expect that from an offense that legitimate shrinks under pressure.

Even though their strikeouts increased in Late and Close and High Leverage situations, they are still below the league average. Clearly, strikeouts are not to blame for the difference in their run expectancy due to rate statistics and their actual runs scored.

Ah, yes, BABIP. Clearly, the Giants are getting their share of hits on the season when they put the ball in play, even in late and close and high leverage situations. With runners in scoring position though, they do not. It is possible that their issues are tied to poor contact in those situations, producing TulowitzkiPopUps or weak groundballs. I do not know, and I hope you don't think I would look that deeply into split stats for an opposing team. Come on. I do have a life.

As preposterous as it seems for a Rockies fan to call the Giants unlucky, it would appear that San Francisco has had Lady Luck turn her back on them a bit when a teammate is standing on second and/or third base. There might be some regression here bringing the Giants towards the middle of the pack in terms of runs scored, which would make them a legitimate threat to Los Angeles. That, however, is far from a given, as there may be some downward regression from the near-league average offense Bruce Bochy has managed to trot out there in 2012.

Divisional Change: Saw their deficit in the division nearly double from 4.5 games to 8.5 games.

News: Jon Paul Morosi says the Diamondbacks have checked in on the availability of Peter Bourjos. That's an odd match, as Chris Young (while hurt) hit very well to start the season, and Arizona is not lacking for a starting caliber outfielder at any of the three spots.

The Diamondbacks agreed to table extension talks with Miguel Montero until after the season. They are now open to negotiating in-season, which isn't surprising given Montero's diminished power and increased strikeouts this season.

Quotable: Paul Goldschmidt on his struggles:

"I've been getting some good pitches to hit but maybe I'm fouling them or swinging and missing too many of them. But for the most part, I am swinging at good pitches and taking a good approach."

Injuries: Stephen Drew (ankle) slid for the first time Saturday since his injury in the middle of last season. RHP Daniel Hudson threw 30 pitchers to hitters Friday. CF Chris Young is expected to start a rehab assignment tonight. Arizona hopes to have all three back late this month.

You Should Know: The Dodgers are a blistering 15-3 at home, which has helped them to MLB's best record. Two of those losses were by one run. The other was by two runs.

News: If the Rangers balk at committing MegaMillionsTM to Josh Hamilton, Nick Cafardo thinks the Dodgers would love to take the risk of signing Hamilton.

I really wanted an excuse to post that beastly stat line. Imagine that with Matt Kemp and Andre Ethier. I can not even faipsdngia'rnkkkkkkkkkkkkkkkkkkk

Buster Olney also suggests Kevin Youkilis as a fit in Los Angeles. Basically, any free agent who could command more than $5million in salary will be linked to Los Angeles. Important to know is the Dodgers' status with contracts heading into 2013.

Stan Kasten does not plan to request a new stadium for the Dodgers, insteadinvesting in improvements to Dodger Stadium.

Steve Dilbeck pleads for transparency in the Dodgers in front office. It is known Magic Johnson's ownership share is just 3%, but that is the only number we know.

There will be no talks of in-season extensions with Clayton Kershaw. Kershaw signed a two year "extension" 15 months ago and is owed $11million in 2013, but will make plenty in arbitration in his last year in 2014.

Quotable: Jokes are always plentiful with a team that is playing well. When asked about being ejected during the Rockies game on Mother's Day, Don Mattingly said:

"I wasn't mad. I was just tired of wearing those pink shoes." - Don Mattingly

Injuries: After being day-to-day with a hamstring injury a week ago, Matt Kemp went ahead and started all six games during the week. He left yesterday's game with a hamstring issue and will get MRI results today. Activated IF Ivan DeJesus from the 15-day DL (5/7). Placed LF Juan Rivera (hamstring) on 15-day DL (5/9). His injury may require surgery. Placed IF Jerry Hairston Jr. (hamstring) on the 15-day DL retroactive to May 7 (5/11). RHP Rubby de la Rosa and RHP Blake Hawksworth were in extended spring training rehabbing their injuries as of last Tuesday. RHP Matt Guerrier (elbow tendinitis) threw 10-15 pitches from 60 feet last Tuesday.

You Should Know: The Padres have 6 of the top 70 draft picks in the June's Rule IV amateur draft.

News: Steven Cohen was one of the two runners-up to owning the Dodgers. As Bill Shaikin wrote, Steven Cohen is one of five potential buyers researching the Padres financial data.

Sharon Annie Heilbrunn conducted a Q&A with Carlos Quentin, whom the Padres are paying more in 2012 than any other player.

Ken Rosenthal believes Edinson Volquez is a trade candidate. His walk rate is still way high, but thanks to PetCo Park, his ERA looks pretty awesome.

Everth Cabrera was arrested for a domestic abuse case from March 16.
Former Padre Mark Loretta has been filling in on TV broadcasts.
Bud Black is regarded as a good manager, but he is on track for his third finish in 4th or 5th place in the last four years. Black did reach 400 career wins this weekend though.

"I think we're going to get better,"

Injuries: Placed RHP Joe Wieland (elbow) on the DL retroactive to May 7 (5/11). OF Mark Kotsay is day-to-day with back tightness, and OF Carlos Quentin may resume his rehab assignment tomorrow. RHP Tim Stauffer is expected to be activated from the DL today to start against Washington.

Guillermo Mota received a 100-game suspension for a positive drug test. Mota is appealing that suspension, but has been placed on the restricted list in the meantime.

Joe Saunders entered yesterday's game with a 2.50 ERA and faced a poor lineup, as summed up by Grant Brisbee:

The Giants scored 7 runs and set a season high in hits.

Charlie Culberson got his first MLB hit yesterday in his MLB debut. Culberson is represented by Scott Barber of CSE, the same agent who represents Kyle Parker.

Quotable: Bruce Bochy, trying to spin Joaquin Arias as the Giants first-string 3B as positive as possible. Arias has been a below replacement level player with the Giants.

"With the job he's done, he's handled the bat and played good third base, he's been the silver lining through the Pablo injury. He's picked us up."

Injuries: Placed IF Ryan Theriot (elbow) on the 15-day DL (5/9). Activated LHP Jeremy Affledt from the 15-day DL (5/13). Freddy Sanchez played third base in an extended spring training game Friday, as third base is an easier angle on throws to first base than from second base for the shoulder.