Tuesday Rockpile: What it Will Take to Make Heads Roll

Share All sharing options for: Tuesday Rockpile: What it Will Take to Make Heads Roll

The Rockies are losers. Losers of four straight and 9 of 10. The much feared California road trip ends tonight, and Coors Field will be a welcome sight tomorrow, though it is worth remembering Colorado stumbled to a 3-6 homestand in their last stay at home. The tumble finds Colorado with the 3rd worst record in MLB, which is significant considering the Rockies have been in MLB's bottom five in just one season, when they finished in the 3-way tie for 27th in 2005.

This is bad baseball, and the natives are getting restless. Dan O'Dowd and Jim Tracy are targets for fan vitriol, but the Rockies are not going to make personnel changes anytime soon.

"It's been frustrating for everyone involved, for our fans, for the players, for everyone. But I don't sense that we are that point (where there would be changes). That's not how we do business." - Dan O'Dowd

How the Rockies do business is to react on samples exceeding one month. As Colorado had a winning record April 20, less than four weeks ago, the alarms aren't going off yet. With the way the Rockies are playing, it does not matter whether their manager is named Earl Weaver or Jim Tracy or Siri, wins would not be coming. May isn't the time for a front office shake-up either. Any changes to the front office or clubhouse would be largely symbolic to appease the fans right now, and the Rockies aren't about to give in to that pressure.

The Rockies are in a unique position. They cycle between the 2nd- and 4th-most important sports franchise in Denver yet still get fairly consistently strong attendance. With a beautiful stadium in the perfect location, prevalence of pre-1993 fans of other baseball teams, affordable tickets and LoDoMagicTM, the floor of attendance remains relatively high. After ranking 1st in the NL in attendance through the 90's, attendance dipped along with the bottoming out of the GenR movement, but its steady increase since does not reflect the wide-ranging product on the field. With such a dramatic shift in baseball quality, attendance has been relatively uncorrelated in recent years. We seem to be finding a settling point for baseball attendance in Denver. Why would the Monforts give in to fan pressure after less than four weeks of bad baseball then? 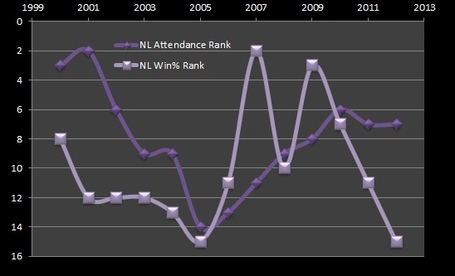 That is not an indictment, as giving in to upset fans can be just as damaging as inaction. Is Bobby Valentine really the better manager for the Red Sox going forward over Terry Francona?

So with the slow trigger on the axe, what would it take? O'Dowd is probably safe to see the build-to-2013 plan come to fruition, barring continued collapse through October. Jim Tracy is most at peril. Colorado has fired only two managers midseason, both in the Dan O'Dowd era. Let's compare:

With comparable to even higher expectations in 2009, Clint Hurdle's team was just about as bad through 34, albeit with a better run differential. To reach the 18-28 mark that doomed Hurdle, the Rockies would need to go just 5-7 in their next 12. It is important to note that Hurdle had no "handshake indefinite extension" going into 2009 though, and Tracy has yet to reach the depth of the season that left Hurdle with a pink slip. We can probably expect two more weeks of horrifying baseball to be required.

Buddy Bell was canned after only 22 games, but he was managing a team headlined by two big free agent acquisitions from the previous year to the worst start in franchise history. (They did rebound to reach 14-20).

I believe the Monforts and Dan O'Dowd really do like Jim Tracy, and he will get a longer leash than most managers, even past ones in Colorado. But that leash is not indefinitely long. If history is any indication, the Rockies need to turn it around in the next two weeks to save Tracy's job.

That leash is longer than most Rockies fans would want this morning, but to be realistic for a moment, in-season managerial changes rarely result in dramatic shift in performance. Of the two managers who steered such turnarounds, one was born in the Herbert Hoover presidency, and the other one is already in the Rockies dugout.

Dexter Fowler clocked a line drive last night, but it did not produce a hit or out. The drive was notable for knocking Troy Tulowitzki out of the game after striking his left leg below the knee. Tulowitzki would exit the game after an infield hit two minutes later, and Tulowitzki's absense proved critical in the final inning. He got on x-ray on his fibula that turned back negative, but we do not yet know if he will play tonight. In related news,Jeff Niemann is out for a few months. He fractured his fibula on a line drive yesterday as well. That is the bullet Tulowitzki dodged.

Baseball Prospectus | Prospects Will Break Your Heart: What Could Wrong in 2012: Colorado Rockies Jason Parks has a good feature, reminding us that our prospects may have considerable promise, yet considerable concerns. He profiles the specific parts of prospects' games in the series to illustrate how prospects could flourish, and how prospects could wash out. His series reached the Rockies, and in an insider piece, he focuses on Nolan Arenado, Chad Bettis, Tyler Matzek, Trevor Story and Will Swanner.