Rockies 6, Diamondbacks 1: Moyer Can Still Pitch. And Hit. Kind Of. Maybe Rogers too. And Fowler. ....... Maybe. Not Definitely. Just Maybe. A Little. I Guess. I'm Noncommittal Here. ......TRADE EVERYONE!

Share All sharing options for: Rockies 6, Diamondbacks 1: Moyer Can Still Pitch. And Hit. Kind Of. Maybe Rogers too. And Fowler. ....... Maybe. Not Definitely. Just Maybe. A Little. I Guess. I'm Noncommittal Here. ......TRADE EVERYONE!

The Rockies got their five game homestand off to a pretty good barely good enough start, with one of their best luckiest wins in what feels like ages. Unlike his past few starts which featured adjustment to old man speed the second time through the lineup, old useless Jamie Moyer was skillfully luckily able to keep the Diamondbacks from making that adjustment. He allowed one run on six hits and two walks through six and a third innings while striking out five, and pitched to his second win of the year, setting the record for oldest pitcher to win a game again at 49 years and over 9000 days, which he will re-establish every time he wins until Julio Franco returns from converting to a pitcher.

The Rockies first broke the game open against Arizona starter Patrick Corbin in the second inning. Jordan Pacheco Not Chris Nelson singled in infield popup machine Troy Tulowitzki to get the Rockies on the board, and the slumping, terrible, worst player ever Dexter Fowler hit his second triple of the season to clear the bases for a 3-0 lead. In the fourth inning, an awkward infield hit from the bat of Moyer scored Pacheco from third, and Fowler, who had doubled, from second base. The final Rockies run came one inning later after strikeout waiting to happen Tyler Colvin tripled, and wild free swinging Carlos Gonzalez singled him in. Yay Colvin! Trade Fowler! DFA everyone.

Our infinitely unintelligent manager Jim Tracy pulled the Walking Dead after he allowed two doubles to Arizona in the seventh. Forgettable and mediocre Josh Roenicke Whatshisface and Esmil how is he still on this team Rogers finished the game with good lucky clean outings. Trade Rafael Betancourt for prospects! DFA Dan O'Dowd.

I wish we didn't win this game because now everyone is going to be wrong and think we're a good baseball team. We need to lose every game until they make the team good again or they're just delaying the inevitable.

Sigh. Now you all know how I feel reading these comments lately. But I'm not bitter or passive aggressive or anything. Right?

One day closer to another loss.

Tune in tomorrow at 1:00 Mountain to see Trevor Cahill trounce Juan Nicasio. I mean, it's not like we can win baseball games or anything. 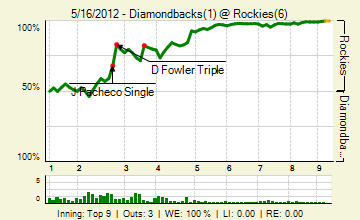