Rockies Retro: Celebrating the Unique Look of Colorado Players Past and Present

Share All sharing options for: Rockies Retro: Celebrating the Unique Look of Colorado Players Past and Present

Everybody loves a good appearance gimmick in baseball, right? From Rollie Fingers' mustache to Troy Tulowitzki's mullet (which just missed this list) to - gasp - Brian Wilson's beard (gotcha), grooming styles of the weird have been a part of the game for years. The Rockies have had their fair share of personalities, and, in typical baseball fashion, have even had a few guys who have been completely clueless about the trends at the time and did their own thing, sometimes to disastrous results.

So, taking a temporary break from profiling players from past years, we step into the fun zone and take a look at the top (bottom?) five facial hair/head hair styles in Rockies history. 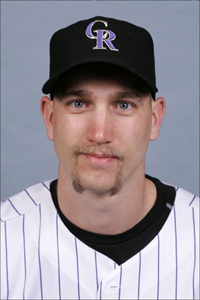 McClellan is a forgettable player in terms of his time with the Rockies, as he made just 12 appearances for the eventual 2007 NL Championship squad. I'm not even really sure why I remember him so well - oh wait, yes I do. It's because of his unbelievably-shitty blonde handlebar. In fact, if the camera never showed a close-up shot of him, one likely wouldn't even be able to decipher that there was actually facial hair there. That is a testament to just how flesh-colored the mustache really was. McClellan pitched to an 85 ERA+ for the Rockies, and to date that month or so with the club accounts for his only big league experience. 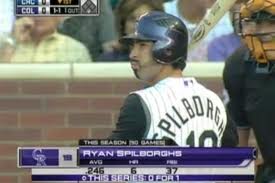 Spilly was always sort of a trickster with his facial hair, and was also a bit superstitious about it. Spilly was known to sport beards, Montana fumbles, goatees, 5-o'clock shadows, and mustaches at various points during his tenure with the Rockies. However, his best look was the conquistador (shown above), which made appearances during the 2009 and 2010 seasons. That zany Spilly...do you guys miss him or what? 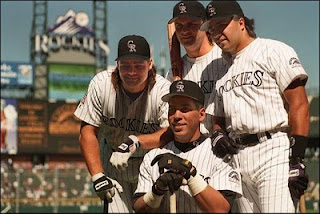 Seriously, do you guys think that Andres Galarraga ever felt peer-pressured into growing a mullet just so he didn't stick out like a sore thumb every time the Bombers had a photo shoot? Vinny Castilla had flowing locks at times, while Larry Walker and Dante Bichette would often go with awful mullet and mustache combinations. However, the Big Cat preferred the clean-cut look (with a little bit of salt and pepper to go with it), and I can't say I blame the guy for bucking the trend. Well done, Andy. 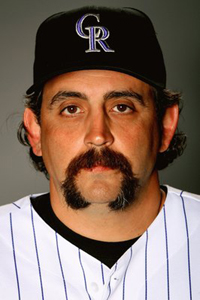 :c is the universal symbol for Sal Fasano, as everyone who was here in 2009 can attest to. Fasano first played for the Rockies in 2001, but no clear shots of him can be found. In 2009, he came back as a non-roster Spring Training invitee. While he did not make the big club out of camp, he still became a fan favorite during ST that year. He went on to play the entire 2009 season with the Sky Sox (as seen here in a rare mustache-less shot). Sometimes Sal was happy, sometimes Sal was mad, and hell, sometimes Sal was even tired (as the picture above shows). But, one thing is for certain: at all times, Sal was loved. 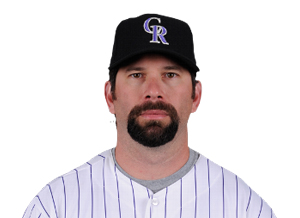 Sometime during the 2006 season, the Toddfather decided to stop shaving the lower-middle portion of his face. While he may have began growing the facial hair as a way to hide from the fact that his career was beginning its twilight (I feel unbelievably sad just typing that), it matters not, as the most iconic player in Rockies history also developed the most iconic look in the process - even to the point where t-shirts of Helton's silhouette are floating around Denver. Todd shaved the goatee once that I can recall, but for the most part he has worn the bear hair for the past six years running. Personally, I give Todd a ton of credit; his old man wisdom has allowed him to carry on a trend that died when the 90's did, and look quite strapping in the process.