A second baseman takes a hard slide from a runner while fielding a throw. He goes down, in pain from the impact. He guts it out, stays in the game, then leaves because of the pain. Then, 24 hours later, the second baseman's leg literally dies, and he is forced to retire. It's an extremely common story in baseball...well, except for that last little sentence.

That could have been Mark Ellis' story, which would have been an extremely sad way to leave a legacy. On Friday night, Mark Ellis suffered a leg injury when Tyler Greene slid into his leg. Ellis remained in the game, batted once, then was taken out and sent to have X-rays, which were negative. He felt fine, then went to sleep.

He was in pain when he returned to Dodger Stadium in the morning, leg swollen. Dodgers trainer Sue Falsone did not like the looks of Ellis' leg, so the Dodgers decided to send him to the hospital. It turns out fluid had built up in his leg, forcing an emergency "fasciotomy," which is essentially a surgical procedure involving placing a large cut (~6") on the body to release fluid pressure, like a lit in an inflatable swimming pool. It is exactly as beautifully disgusting as you imagine. That cut will remain open through tomorrow to ensure full drainage.

Had doctors attempted the procedure 6-7 hours later, the muscle tissue in Ellis' leg may have died, essentially forcing the amputation of an athlete's leg 24 hours after being slid into at second base...a play that has occurred to second baseman thousands of times.

Ellis should be fine now, barring infection, but he will be out at least six weeks. Ellis was having a strong season for Los Angeles, and with Juan Uribe hurt, the Dodgers don't have much in the way of able, experienced replacements. Of course, with the way Saturday went, the only emotions tied to Mark Ellis in Los Angeles right now are relief and thankfulness.

You Should Know: Because merchandising might not as obvious as you'd think:

The @Dodgers sold more merchandise to women last year than any other MLB team. The @DBacks were #2.

Divisional Change: Fell one game further behind the Dodgers.

News: Ken Rosenthal suggests that Arizona might entertain trading Joe Saunders if they fall out of contention.

Chris Young was hitting like Matt Kemp before he got injured. Young returned Friday and promptly stroked a 2-run double.

In what surely would upset Moises Alou more than Steve Bartman, Justin Upton has put his twitter handle on his batting gloves.

Quotable: Kevin Towers, on the status of his team:

"Last year was last year. We're a different team. A lot of the same guys here, but I personally think we were playing better last year at this time than we are this year. We haven't played that well this year." - Kevin Towers

Last Week: 5-2. 1-1 vs. Diamondbacks. 1-1 @ Padres. 3-0 vs. Cardinals. Other than Texas, the only team with a better run differential than the Dodgers in MLB is the team Los Angeles just swept. They won't slow down.

You Should Know: Chris Capuano went 24.2 IP without allowing a run before Michael Cuddyer homered May 11. Now another lefty is on a scoreless innings streak, with Clayton Kershaw on a streak of 22 consecutive goose eggs.

Divisional Change: Gained one game on every divisional opponent, and three games on the Rockies.

News: Ned Colletti expects to have flexibility at the deadline.

Dee Gordon is spending time on the bench. He has just two hits since May 8 and has been a very big disappointment overall this year. Even his 12 stolen bases have come with five caught stealings, which render his overall basestealing barely above average.

Adam Kennedy batted fifth for the first-place Dodgers. This division is the (NL) Worst.

Dodger Stadium is a pitcher's park, but as Eric Stephen notes, the Dodgers' hitters are producing much better at home than on the road.

Ian Miller comes to the shocking conclusion that the Dodgers will regress a bit in this Baseball Prospectus article. In fairness, he actually does go in to detail why.

Quotable: Ken Gurnick, on one of the Dodgers' recent call-ups:

"Elian Herrera, promoted this week from Triple-A Albuquerque as a speedy infielder, was signed by the Dodgers in 2003 as a slow catcher."

You Should Know: The Padres are bumped and bruised and broken and mangled.

According to my calculations, there are 166 players on the DL. #Padres lead league with 14. #Rangers have none. 43 players on DL in AL East.

Divisional Change: Despite falling one game further behind division-leading Los Angeles, the Padres moved into a tie for fourth place thanks to a winning week and a disastrous week for the Rockies.

News: Dan Hayes of the NC Times says the new ownership group could be chosen from the five finalists in weeks.

Orlando Hudson was released. He was not very good. Tim Sullivan writes that GM Josh Byrnes has a history of recognizing sunk costs when he sees them.

Clayton Richard pinch hit, singled and scored the winning run Sunday in the 13th inning. A reminder for those that don't follow the Padres: Richard is a pitcher.
Everth Cabrera's domestic violence trial is set for June 11. His alleged crime was committed against his wife in Arizona on March 16.
The Padres pitching staff ranks 8th in ERA in MLB yet 27th in fWAR. Ah, Petco.

"We felt it was time to make a change. O-Dog (Orlando Hudson) has been a two-time All-Star, four-time Gold Glove winner and a contributor to playoff teams, but at this point, we want to give our younger players an opportunity." -GM Josh Byrnes, because the younger players couldn't be any worse.

Injuries: Activated RHP Tim Stauffer from the 15-day DL (5/14) and placed him back on the 15-day DL on Friday (5/18). Placed SS Jason Bartlett (knee - 5/15) and LF James Darnell (5/18) on the disabled list. OF Mark Kotsay was placed on the 15-day DL with back tightness (5/19). OF Jeremy Hermida had surgery last Tuesday on a sports hernia. LHP Cory Luebke is leaning towards Tommy John surgery. More than half an MLB roster is on the Padres' DL.

You Should Know: After being swept in their first series of the season, the Giants have been within two games of .500 every day of the season. They are just treading water.

Divisional Change: Fell one game further behind the Dodgers

News: The Giants want a corner outfield bat, preferably one with power...... 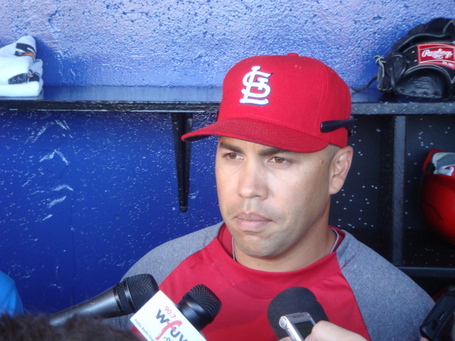 via dicomo.mlblogs.com. When asked about not signing with the Giants last offseason, Carlos Beltran said:

" I don't think they made an effort (to re-sign me). They didn't call my agent at all."

Andrew Baggarly thinks the Giants should just be patient with Charlie Culberson rather than add some really poor "proven" infield depth. Grant Brisbee looks at it a little closer.

Melky Cabrera would love to sign a multi-year extension right now. Well, of course he would. He had one great year last year following a disastrous 2010, and his first six weeks of 2012 have been strong. Sell yourself high.

Matt Polishuk of MLB Trade Rumors thinks 3 years/$24million sounds about right, but that dollar figure could raise a few million per if he maintains this production through the end of the season. Cabrera is a free agent after the season.

I couldn't have cared less about baseball stories that didn't involve actual gameplay growing up. It was all about statistics and wins, double plays, pick offs and home runs. Now, the more fascinating stories to me are about new stadiums, ownership groups, and organizational philosophy. That's why I find the territorial dispute between the Giants and Athletics so interesting, as it really has the potential for quite a bit more far-reaching impact than even drafting Tim Lincecum did. Unfortunately,

the Giants-A's battle has been at a stalemate for some time.

Quotable: After I opined that Orlando Hudson was likely "toast" and wouldn't help the Giants much, Julian Levine (GiantsNirvana) responded:

Toast is better than crumbs

The Giants have discussed bringing in Hudson, but there was been no consensus whether toast is better than crumbs. Hudson has now signed with the White Sox

Injuries: Brian Wilson, asked when he knew something was wrong: "Birth." Wilson began a conditioning program on Wednesday. IF Ryan Theriot and 3B Pablo Sandoval will start taking at-bats in extended spring training today. 2B Freddy Sanchez had another setback and needed an epidural last Wednesday. It is becoming less and less likely he ever appears in a Giants uniform again.