Share All sharing options for: Tuesday Rockpile: Can the Rockies Lose 100 Games?

The Colorado Rockies are mired in one of the worst months in franchise history. No amount of ketchup removes the rotten egg smell. They've lost in every way possible, pissing away a lead late, squandering an early lead, hardly showing up, being on the wrong end after an entertaining circus, falling just shy in a well-played game.

With just 15 wins on May 22, Colorado has just one win than the Twins, who bring up the rear in MLB once again. Their 15-26 record, while two games better than the 2005 Rockies on this date, is still on pace for 103 losses. Colorado has never lost more than 100 games; in fact, they have never tallied more than 95 L's in a season, something they reached in 1993 and 2005. Along with the Angels, the Rockies remain one of two MLB franchises to avoid that shallow mark.

With the loss yesterday, the losing is offiically wearing on the Rockies players as well as fans.

"It's disgusting what is happening...We are not this bad." - Matt Belisle

That is, of course what everyone wants to believe, and I certainly believe this to be true. This can be shown with numbers, as RhodeIslandRoxFan has calculated the wide gap in performance vs. projections, even tempering the projections a bit. It hasn't just been Jeremy Guthrie and Jhoulys Chacin, who are the most glaring culprits. After starting well in April, Michael Cuddyer has fallen on hard times in May. (Click here for very depressing graphic).

As with most any team playing this poorly, there is bound to be a kick back to respectable play. Heck, that 2005 squad was built to lose and still rebounded quite a bit. It is doubtful this team will lose 100 games, as they are just 3 games past the pace now, well within range of better bounces and one breakout performer.

It could happen though. April was a home-heavy, fairly light schedule. June won't be so kind. Their schedule until the All-Star Break:

Of the fourteen opponents they are slated to play, only six have losing records. Of those six, four were popular choices for divisional champions. Even if Colorado gets some positive regression to the mean, their superior opposition in June figures to cancel some of that out. Should the team stumble through that month, particularly the 10-game road trip through Detroit, Philadelphia and Texas, the Rockies' status as a seller will be completely set in stone.

At that point, on comes the youth for an extended audition. With youth comes growing pains. Even the best homegrown talents struggled in their first few months in The Show. The expected production for the second half of the season takes a nosedive.

It may get better. It probably will. It certainly is no guarantee though, and it takes little effort to spin a tale of a 100-loss season. While 2012 was bot built to be a contending year, should they stumble to triple digits in L's, there will be no defense for it.

Troy Tulowitzki knows he must "get going" to help Colorado Rockies - The Denver Post He has called his play brutal and promises to at least bring positive energy while working out of his funk.

Rockies Mailbag: Inferior pitching infuriating for Aussie - The Denver Post - It is no doubt a joy for Troy Renck to answer his mailbag in times like this, but he puts the effort in.

Baseball Prospectus | What You Need to Know: Tuesday, May 22 BPro profiles a Kansas City starter who has the fastest fastball in MLB this year and a FIP of 2.25...in Verlander territory. Because I have no shortage of salt it seems, I figured I would share this, as you have no doubt heard of him.

Lastly, you've seen photos of Willie Mays' storied catch. It is in black and white, which adds to the mystique, but just in case you wanted to imagine being there and seeing it in living color, someone colorized the photo and posted it on reddit. 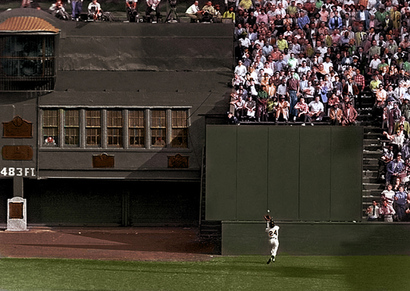