In a year where the Rockies are just 16-27, I am somehow 7-1 in Rockies game threads (or in other words, the Rockies are really good at playing baseball on Wednesdays this year). The only loss came on the double header day at the end of April. Fascinating. Well, with that tidbit of trivia out of the way, let's talk about this Rockies win.

It took starter Alex White a little bit to find his feet. Two out hits from Hanley Ramirez and Greg Dobbs produced a Miami run in the first inning, followed up in the second by RBI singles from Carlos Zambrano and Jose Reyes to set the Rockies into an early 3-0 deficit. White improved considerably after this, allowing only one more run to the Marlins in the fourth inning over his six innings of work.

In contrast, Zambrano on the mound for Miami was excellent through the first three innings, retiring nine out of ten Rockies during that time. The pitcher fell apart in the fourth. After walking both Marco Scutaro and Carlos Gonzalez to start the inning, Troy Tulowitzki refused to pop up to the second baseman like usual and doubled in the lead runner. Gonzalez scored on a Jason Giambi sacrifice fly, and capping off the three run inning was a a second sacrifice fly from Michael Cuddyer. Sweet manufactured runs.

The Rockies weren't done. Come the fifth inning, Zambrano allowed a walk and two singles in between two outs, producing a fourth run. Zambrano was unable to retire the side, as Tulowitzki once again came through in a fashion we'd expect from a star player, belting his sixth home run of the year and taking the Rockies lead to three runs. The Rockies managed another run off of long reliever Chad Gaudin, as Gonzalez tripled in Scutaro.

Late inning relief from Adam Ottavino, Matt Belisle and Rafael Betancourt was superb, and Alex White secured his first win of the 2012 season for the Rockies.

Tomorrow, the Rockies have an off day to travel to Cincinnati, where a three game weekend series will occur. Tune in on Friday at 5:00 Mountain to see Christian Friedrich take on a very effective Johnny Cueto. 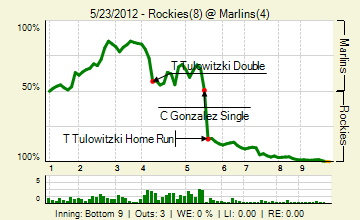