Whatever dreams Rockies fans may have had for 2012, the clear goal of the season was to acquire as many young arms as possible, then identify which ones would be worth building around in the rotation. As Grant Brisbee expertly depicted yesterday, sometimes this all comes together quickly, and playoff contention follows. More often, the result of a season of auditioning is what the Rockies have seen: a lack of quality pitching, and a lack of quality starts.

"Quality starts" are defined as a start of 6 or more innings allowing 3 or less runs. The term gets criticism, considering the 4.50 ERA it engenders, but as Sky Kalkman pointed out yesterday, 6 IP of 3 ER plus 3 innings of an average bullpen equals 4.17 runs per game, which is league average this year. You can win every game that way. More accurately, the average quality start holds an ERA near 2.00. Beyond that, picking up consistent innings is easier on the bullpen, and the Rockies' deficiency in this department has the relievers significantly overworked. 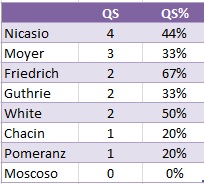 A surprise to no one, the Rockies rank last in Quality Start percentage in the National League at 35%. The league average is 56%, quite the disparity. For the season, the Rockies rotation has combined for 15 quality starts and have 16 wins. They are 9-6 when the starter turns in a quality start (a 97 win pace), yet just 7-21 when the starter fails to reach that level.

Only Christian Friedrich has delivered quality starts at a rate above a league average starter, but his small sample felt a kick in the nuts last Saturday in his Coors debut.

The problem, as it tends to be with young pitchers, has been that the Rockies rotation is leading the league in walks, which work directly against innings and runs totals. This is why control and command is critical, and why the Rockies seem to be in no hurry to promote Drew Pomeranz, who struggled mightily in AAA yesterday.

In related news, the Rockies are getting a second opinion on Jhoulys Chacin's shoulder. An MRI previously revealed inflammation of the shoulder and biceps tendon, but he has been unable to throw since his last start May 1.

"Once the team starts sifting through the pitching-related returns of the 2012 season, they'll have a much better idea of what they're building around. This season hasn't been an immediate success for the Rockies -- at least, not through May -- but that doesn't mean it's been a failure."

This is correct for now, but to know who they are building around, someone will have to step up. Right now, every spot in the 2013 rotation is up for grabs, with no one making a convincing argument beyond comparison to struggling teammates. The future of the Rockies will need to come in to focus in the next four months, not so much from Nolan Arenado, next month's draft or Troy Tulowitzki's slump, but who learns from their struggles to earn a rotation spot with their performance.

Colorado Rockies need Marco Scutaro to produce from leadoff position - The Denver Post I can think of a solution here, but Jim Tracy might need to dial up a certain number from a phone book.