Coors Field's park differential has skyrocketed this year. It is at its highest point in quite some time, by far the highest in the post-humidor era. Thankfully, I have come up with a logical explanation: the Rockies couldn't afford to build a new humidor for Colorado Springs, so they simply picked this one up and flew it in via helicopter. And there was a giant whale there. My imagination doesn't lie.

The Rockies offense exploded today with two exceptional innings surrounded by generally favorable pitching. In the first inning, Michael Cuddyer got the Rockies off with a bang, his second grand slam home run of the season and sixth overall, upheld after a replay check. Houston struck back against starter Christian Friedrich in the second inning. manufacturing a run on three singles. The Rockies would get that run back in the bottom of the inning when Marco Scutaro singled in Dexter Fowler, who had doubled.

Friedrich hit a roadblock in the third inning. Houston would tie the game at 5-5 on four hits and a walk, capped off by a double from Chris Snyder. Friedrich would recover and pitch the next three innings cleanly, with a line of six innings pitched, 11 hits allowed, one walk, six strikeouts and five runs allowed. The young pitcher's struggles continue in his second attempt at a Coors start, but the result was positive this time. Friedrich picked up his THIRD MLB WIN (3-1).

The rest of the game consisted largely of an array of home runs, most of which came from the bat of Carlos Gonzalez. The outfielder hit his 11th, 12th and 13th home runs, becoming the first Rockie to hit 3 in a game since Jason Giambi accomplished the same in 2011. A surging Dexter Fowler belted his eighth home run of the season, a three run shot with no outs in the sixth that was part of what would ultimately be a six run inning. Jordan Pacheco singled in Wilin Rosario, who reached second base on an error to lead off the inning. Gonzalez' second home run was a two run shot, bringing in Scutaro.

Adam Ottavino, Esmil Rogers and Josh Roenicke all avoided allowing runs in relief. The Rockies have won their third straight game for the first time since mid-April, and have ensured their first series win since they took 2 of 3 from the Dodgers to begin the month. There were a total of 29 hits in the game, with the Astros outhitting the Rockies 15-14. The only negative of the game was the removal of Troy Tulowitzki due to a potential groin injury. No word yet on the significance.

Tomorrow, the Rockies go for their first sweep of the season, with Jeremy Guthrie looking to turn his season around against Bud Norris, who has been very good this year. 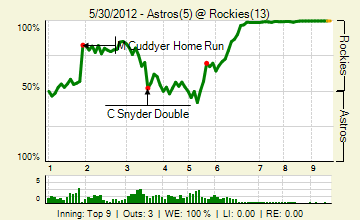