The Diamondbacks won the NL West by 8.0 games. Their 94 wins were more than any Rockies teams managed, and that was a 29 game improvement from the previous season. That kind of season set off fluke alarms everywhere, and with the career seasons many Diamondbacks enjoyed in 2011, Arizona was a popular pick to regress in 2012. 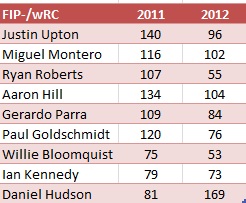 A month into the season, that regression has seemingly come to pass. Arizona has lost 4 of 5, they have a losing record at home, and they are 4.5 games out of first place. To his credit, Ian Kennedy has been almost exactly the same guy that was a Cy Young finalist in 2011. The rest, however, have not.

Recall that the lower the number is better for FIP-, with the opposite true for wRC+. Of the many contributors to Arizona's division title in 2011, only one - Ian Kennedy - is really within sniffing distance in 2012 of his previous season's line. Hudson is also on the disabled list.

The pen has regressed a bit as well, but mostly, it has been Arizona depending on repeat performances from their core and simply not getting it. Some of those players will rebound and approach their previous season's output, but it should be noted Arizona's team BABIP of .303 is 11th in MLB.

Aside from the Diamondbacks moving up a half game, the divisional standings are exactly the same as last Monday.

You Should Know: The Diamondbacks have lost 10 of 14 one-run games.

Divisional Change: Gained one half game on the Dodgers.

News: Dan Mennella at MLBTR thinks Arizona will pick up JJ Putz's $6.5million 2013 option. This despite Putz' struggles so far this season, which really seem to be a result of poor luck more than anything.

Vladimir Guerrero impressed Kevin Towers in his tryout, but there has been no move to sign him yet.

Miguel Montero is no closer to reaching an extension with Arizona.

Joe Saunders tried to pull off a web gem, but he failed miserably.

"But it's going to be Orel Hershiser pitchability with Roy Oswalt stuff."

Transactions: Called up LHP Patrick Corbin from AA Mobile and optioned RHP Joe Martinez to AAA Reno (4/30). Transferred IF Geoff Blum from the 15-day DL to the 60-day DL.

Injuries: There is still no timetable for Chris Young's return. His shoulder still feels sore. RHP Daniel Hudson is scheduled for a bullpen session tomorrow.

News: Many think Andre Ethier would be a risky long-term sign, but according to Jayson Stark, many executives think the Dodgers have no choice but to re-sign Ethier.

The Dodgers are universally expected to spend money in the offseason, with Cole Hamels, Mike Napoli, Josh Hamilton and Miguel Montero all potentially relocating to Dodgertown...assuming the payroll will indeed rise for Ned Colletti.

Stan Kasten, on the future of the Dodgers' payroll:

"I expect moving forward it's going to be north of where it is now. But I have to tell you, I never focus on a target in getting the 25 guys....So focus on the players that we get and don't worry so much about the payroll. I don't have a set number for you because we're not going to do it that way. We're going to take every opportunity that we can. If that means increasing payroll, then that's what's going to happen."

Despite all the publicity that Stan Kasten and Magic Johnson have had in the last two months, neither are actually the majority owner of the Dodgers. That would actually be Mark Walker, whom Ramona Shelburne profiled recently.

Bobby Abreu signed with the Dodgers, and given his name floated around Los Angeles for several years with the Angels, perhaps his value seemed higher to the Dodgers than other teams. David Young sees a pattern of former Angels flopping with the Dodgers.

Eric Seidman wrote at Fangraphs that Don Mattingly is costing the Dodgers runs by having speedster Dee Gordon lead off with catcher AJ Ellis hitting 8th. By switching them, Matt Kemp has more ducks on the pond. OBP forever.

"He's been great, better than I honestly thought he was. I didn't do enough research. He grows on you all the time. He's been tremendous at second. But he's also a good hitter, he knows exactly what to do at the plate. He's given himself up six or seven times. For me, I love him."

Injuries: Activated RHP Todd Coffey from the 15-day DL. LHP Ted Lilly is day-to-day with a stiff back but threw a bullpen session Friday and should be able to return to the mound tomorrow. IF Juan Uribe (wrist) was able to pinch-hit Saturday. Jerry Hairston Jr. and Matt Kemp are both day-to-day with hamstring injuries.

You Should Know: The Padres actually have a better run differential than the 9-18 Royals, the 12-16 Pirates, the 12-16 Brewers and the 15-13 Mets. They already are underperforming their Pythagorean W-L by three games. Then again, that isn't anything new, as they ended up 8 games below their Pythagorean in 2011.

News: Heath Bell is no longer the Padres closer. Just like that, after dropping $27million on him. With the Padres seemingly creating effective relievers out of thin air, it sure seems like Petco might be a deceptive relief pitcher factory, with relievers likely to fail after leaving the pitching-friendly Petco Park. With Ernesto Frieri being traded to the Angels this week (which Padre fans approve of), this is important to look at.

Fortunately, Paul Swydan crunched the numbers for Fangraphs. It's not true. Relievers leaving the Padres are not worse in their next stop. In fact, they might be better. So don't blame Petco Park for Heath Bell being worthless in 2012. There is something else wrong there. Now that we have articles out there disproving "PetCo creations", hopefully we can get someone out there with clout coming to the same conclusion about "Coors creations" by looking at home/road splits for Matt Holliday, Seth Smith, Chris Iannetta, etc.

Huston Street was an odd acquisition for the Padres in one sense: a $7million closer rental for a surely last place team. But Josh Byrnes wanted a closer to ease the loss of Heath Bell, and Street would likely be traded by the deadline, as Dan Mennella pointed out. Then he would essentially trade Nick Schmidt + $3.5million for a better prospect and 3 months of closing.

The only problem with Josh Byrnes plan is that Street has been out at least ten days with an injury in all but one season of his career. He is now on the disabled list, along with 30% of the Padres projected Opening Day roster.

Dan Hayes of the North County Times writes that both Jason Bartlett and Orlando Hudson could both be released before the end of the season. At any rate, the infielders are not in San Diego's long-term plans. Everth Cabrera probably isn't either, with Alexi Amarista leaping past him .

Quotable: Sometimes, the obvious question has to be asked, and the obvious answers result. When asked about what it is like to close games with Street out, Padres relievers say:

"You get the ball with the game on the line at the end of the game and try to get the last three outs of the game." - Andrew Cashner

"I haven't done it up here, so it's probably more pressure" - Dale Thayer

"You do have that little extra adrenaline, a little extra something to get the job done, because it is the last inning. You have to finish it off." - Luke Gregerson

Injuries: Placed LHP Cory Luebke (elbow strain) on the 15-day disabled list retroactive to April 28 and transferred 1B/OF Kyle Blanks to the 60-day disabled list (5/2). Blanks underwest season-ending surgery on his labrum last month, and an MRI revealed potential damage to Luebke's UCL, which might need Tommy John surgery. Placed RHP Huston Street (lat strain) on the 15-day DL and transferred IF Logan Forsythe from the 15-day DL to the 60-day DL (5/5). RHP Tim Stauffer and OF Carlos Quentin are rehabbing and near returns.

You Should Know: Despite having a .500 record, the Giants have won 6 of their 9 series, losing to Miami and Arizona in three-game sweeps, and to the Reds two games to one.

News: With Pablo Sandoval hitting the disabled list for up to six weeks, the Giants have lost one of the only reliable bats in their line-up. They aren't likely to find a viable replacement in trade either, writes Jayson Stark. Naturally, Grant Brisbee is in fits.

The Giants have three starting pitchers with an ERA under 2.35 in Matt Cain, Barry Zito and Madison Bumgarner. Due to extensions and Zitoness, those three have gotten a lot of attention. Tim Lincecum (5.68) has gotten attention for the opposite reason. Forgotten in all of this is the guy who had the most attention last year - Ryan Vogelsong. He actually has a better FIP in 2012 than 2011.

Angel Pagan has a 20 game hit streak. Pablo Sandoval achieved that to start the season. Believe it or not,Pagan and Sandoval are the only San Francisco Giants teammates ever to have 20-game hit streaks in the same season.
Willie Mays turned 81 yesterday.
Matt Cain is very good, and exactly the pitcher to point to when someone spouts off W-L records. Grant Brisbee opines and whines:

Cain is still five games under .500 for his career. His career ERA is now 3.32 over 209 starts...yet Brett Tomko has a better career winning percentage. That was Cain's 22nd career start with seven or more innings, two or fewer runs, and a no-decision. That ties him with Jack Morris, who made 318 more starts than Matt Cain has so far in his career.

"He's free! He's playing! What the hell are we talking about? Stop! Stop! It may end up turning out that (he becomes the everyday first baseman). But some of it, you have to earn. He has had a lot of at-bats that aren't major-league quality. This lineup is starving for some consistency ..." - Brian Sabean

Injuries: Placed LHP Jeremy Affeldt (knee strain) on the 15-day DL retroactive to April 28 (5/1). Placed 3B Pablo Sandoval (broken hamate) on the 15-day DL (5/3). He'll be out until mid-June. 1B/OF Aubrey Huff played long toss May 2 in his bid to return from an anxiety disorder. While Huff is eligible to come off the disabled list today, he likely will be out a few more days.. 2B Freddy Sanchez took infield and could return in the next two weeks.