The ball stayed in the yard today, but the a productive sixth inning mixed with a delightful debut for 2008's first round draft pick Christian Friedrich led to the Rockies breaking a five game losing streak and avoiding their second straight sweep.

Friedrich's control was a bit shaky to begin the game, but the rookie quickly settled in, despite his inefficient pitch count. Jesus Guzman singled in Chris Denorifia in the first, but Friedrich escaped further damage until the third inning when Yonder Alonso doubled in Cameron Maybin, who had reached on a Marco Scutaro throwing error for an unearned run. The Padres wouldn't strike again against Friedrich, who lasted until the sixth inning, striking out seven in his MLB debut and giving the bullpen a bit more relaxation before the off day tomorrow. The lefty wins his first MLB appearance, but may not be given another start if Jeremy Guthrie is activated next Tuesday, though the off day tomorrow may allow the team to demote Alex White instead in that situation

The Rockies offense finally switched on in the fourth, when Jason Giambi smacked the first of two Rockies hits that were mere inches from leaving the confines of Petco Park. Carlos Gonzalez scored on the play, but Michael Cuddyer was thrown out trying to score from first base. The call was challenged, but the ruling stood as a double and not a home run.

The 2-1 Rockies deficit lasted until the sixth inning, when the Rockies put up a four against opposing starter Anthony Bass spot to take the 5-2 lead. After Jonathan Herrera reached on a fielding error from San Diego shortstop Andy Parrino, he was doubled to third by Gonzalez and came around to score on a Cuddyer sacrifice fly. Giambi was intentionally walked, Wilin Rosario came to the plate and hit Petco Fenceball, which like the previous one was reviewed and upheld as a double. The hit was productive regardless of Fence Interference, scoring Gonzalez and an exhausted Giambi all the way from first. Chris Nelson finally picked up a road hit on the 2012 season, singling in Rosario for an insurance run. Nelson would get another RBI single in the eighth inning to account for the final Rockies run.

In relief, Rex Brothers retired his first target but followed with a walk and a hit, forcing Matt Belisle to finish out the seventh inning. Belisle had to escape from a similar jam of his own in the eighth inning, but the dependable reliever did so without damage. Rafael Betancourt finally got his first inning of work in five days, despite the non-save situation.

The Rockies have an off day tomorrow as they travel for three games against the Dodgers in Los Angeles. Jamie Moyer will take on Chris Capuano in the first game of the series on Friday at 8:00 Mountain. 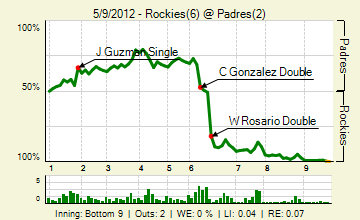