Remember when we were good in interleague play?

The offenses for both teams got started quickly. Seth Smith hit a two run home run in the first off of Josh Outman, always an interesting case when two players were traded for each other. The Rockies rebounded in the bottom of the inning with five runs, four of which came off the bat of Todd Helton's seventh home run of, a grand slam. The final run of the inning was batted in by Outman himself after Oakland starter Tommy Milone intentionally walked Chris Nelson. The Rockies offense continued in the second inning as Michael Cuddyer hit his eighth home run of the season.

The Athletics mounted a retaliation in inning #4. Brandon Inge singled in Johnny Gomes, and a two run home run from Brandon Moss lowered the Rockies lead to just one run, but once again the Rockies returned the favor in the bottom of the inning. After Marco Scutaro, (who had a four hit game) singled, Michael Cuddyer (who also had a four hit game, accounting for two thirds of the Rockies 12 hits together) hit is second home run of the night.

Though Scutaro and Cuddyer kept hitting, the Rockies offense was done for the night. The Athletics, however, kept picking away, ensuring that they'd still be in the game by the final innings. Outman lasted five innings, his longest start thus far, allowing five runs on six hits and a walk. Adam Ottavino came in to relieve the starter, promptly yielding a home run to Gomes to lead off the inning. The Athletics would lower the Rockies lead to 2 runs the following inning. An early throwing error from Scutaro led to a lapse in confidence for reliever Rex Brothers. Cliff Pennington, who reached on that error, came around to score on a Colin Cowgill single off of Matt Belisle.

Coming in for the save, Rafael Betancourt was at his worst in quite some time. Coco Crisp led off with a single, and would advance to third base on a sacrifice bunt and a stolen base. Cowgill would fly out to Cuddyer in right field, who was unable to throw out Crisp at the plate. Smith struck back once again with a double. Betancourt would walk pinch hitter Josh Reddick, and both baserunners would score on an Inge double, giving Oakland a 10-8 lead. Despite another hit from Cuddyer to lead off the bottom of the ninth, this time the Rockies bats stayed silent and the game was lost. Betancourt took his second loss and second blown save of 2012. 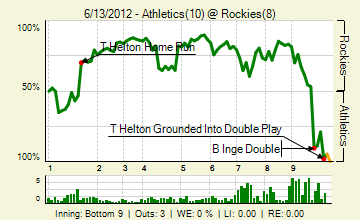 The worst kind of graph, that.