Another day, another Rockies loss.

Alex White, the second entry in the four man rotation experiment, lasted just three and two thirds innings, and would be charged with five earned runs over that time on five hits and two walks without striking out a batter. He lasted exactly 75 pitches. The starter allowed a first run inning to Philadelphia when Juan Pierre tripled and scored on a Hunter Pence groundout. The Rockies retaliated in the top of the second. After singles from Jordan Pacheco and Chris Nelson, Wilin Rosario hit is 10th home run of the year to give the Rockies a 3-1 lead. It was naturally short lived, as Michael Martinez hit a 3 run homer of his own, his first of the year.

Solo home runs from Michael Cuddyer (11) and Nelson (4) put the Rockies back on top by the fourth. In the bottom of the inning, White allowed a double to John Mayberry, who came around to score when Matt Reynolds allowed a double to Jimmy Rollins after White had been relieved.

Both offenses went silent as Phillies starter Joe Blanton found his feet and Jeremy Guthrie excelled in his first long relief assignment since the pitching realignment, and the game remained tied until the ninth inning. Phillies closer Jonathan Papelbon was put into the game. After retiring the first two batters, Rosario doubled. The Phillies gambled with an intentional walk to Jason Giambi, and would p;ay for that decision when Dexter Fowler singled in Rosario for the lead.

Rafael Betancourt's turn to close, and like Papelbon, he retired the first two batters. Everything was looking good. Suddenly, a wave of confusion swept over the Rockies across the field. Something wasn't right, and it had to be fixed. The Rockies were not to win this particular game. As if it was meant to be, former Rockie punching bag Ty Wigginton singled, and he would come around to score on a Pence double to tie the game. An intentional walk and a single loaded the bases, and when Marco Scutaro fielded a ball behind second base, the Rockies lost a game of inches, and Scutaro's high throw pulled Helton, normally careful with his footwork, off the bag.

Rockies lose, and all is right in the world. The universe is safe.

I need to stop drinking so many sugary drinks.

Tune in tomorrow at 5:00 Mountain to watch Jeff Francis take on Vance Worley. You know, if you REALLY want to. 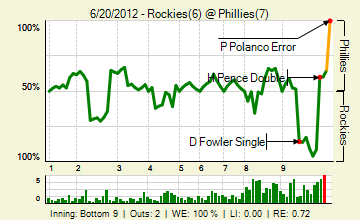