This was not the debut any of us wanted for Edwar Cabrera. While the pitching prospect is still probably a ways off from being ready for a full time spot in the Rockies' rotation, the injuries, ineffectiveness and wacky experiments that can sum up the 2012 rotation have resulted in this. it's always sad to see somebody's first game go so sour, especially because of some circumstances largely out of their control.

Cabrera's biggest weakness over the past few seasons has been the long-ball. This phenomenon plagued Cabrera in his debut; he allowed three homers to the Nationals over his two and a third innings pitched. Seven runs credited to the rookie crossed the plate, only five of which were earned, due to a collection of throwing errors from Wilin Rosario.

Matt Reynolds finished the third inning, allowing another run in the process. Jeremy Guthrie was the designated long reliever (second starter?) today and was similarly ineffective, allowing three more runs on six hits and a walk over four innings pitched. Adam Ottavino and Rex Brothers kept Washington's score at 11 during the final two innings of the game.

The Rockies' only run in the first seven innings was produced in the third when Marco Scutaro singled in Wilin Rosario. The rest of the Rockies' offense came far too late into the game, only once Washington starter Jordan Zimmermann had left the game. The team scored two runs in each of the final two innings. In the eighth, the team took Chien-Ming Wang for a bit of a ride. Tyler Colvin doubled in Carlos Gonzalez, who had also doubled and advanced to third on a throwing error from Rick Ankiel. Jordan Pacheco then singled in Colvin. In the ninth, the Rockies produced two runs off of reliever Michael Gonzalez, with Jonathan Herrera taking a walk, Dexter Fowler doubling him in, and a Scutaro single scoring Fowler, all before any outs were recorded. The Nationals brought in former Rockies minor leaguer Ryan Mattheus, who promptly shut down the rally and ended the game. 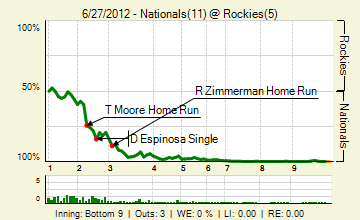 I love that tiny little bump at the end of the graph in the ninth when the Rockies' chance of losing went from 99% to 98% before ultimately settling at 100%.