Tuesday Rockpile: Rockies Get Dahled Up on Day One of Draft

Share All sharing options for: Tuesday Rockpile: Rockies Get Dahled Up on Day One of Draft

The Rockies quest to make up for poor drafting from 2005 (sans Tulo) to 2008 took an important step yesterday in both New Jersey and in Arizona. Christian Friedrich's splendid start against the Diamondbacks helped to make the 2008 draft class look a little better. All the way across the country, the Rockies found themselves drafting in the top ten picks of the amateur draft for the first time since 2006. After the consensus top eight names went off the board in the first eight picks, albeit in a surprising order, the Rockies had the opportunity to select any one of the several names tied to them.

For added digestion, here are other scouting reports (subscriptions may apply):

The Rockies have only selected two high school position players in the first round prior to Dahl - Ian Stewart and Chris Nelson. The draft may be a crapshoot - the only two #10 picks since 2000 with 6.0+ career WAR are in the Giants' rotation - but the general consensus is that the Rockies got good value with this pick. He has a strong presence of all five tools, which has led to some "comps" of Johnny Damon, Jacoby Ellsbury, Colby Rasmus and Grady Sizemore. Any of those would be fine. He is likely to be assigned to the inaugural Grand Junction Rockies when signed. Follow him on twitter here.
In the supplemental round, they used their Mark Ellis compensation pick on RHP Eddie Butler of Radford University, who seems to have relief pitcher all over him. At least initially though, the Rockies plan to keep him as a starting pitcher:

"(Butler) had the ability to pitch deep into games in college, and we think he'll be able to do it here at the professional level. I think he's going to be a Jered Weaver-type guy. He'll be lean and wiry. It's a loose arm." - Bill Schmidt

The second round starts at 10am MDT today, with rounds 2-15 being decided. Colorado chooses 13th in the second round. For an idea on who is available, check Baseball America. California HS SS Tanner Rahier is still available but has a good chance to be taken before the Rockies pick. John Sickels highlights five Day Two sleepers.

After throwing seven shutout innings, Christian Friedrich now leads the Rockies in wins with four despite making his MLB debut less than a month ago. He is one of six MLB rookies to lead their team in wins. In his three starts on the road in NL West parks, he is now 2-0 with 2 ER allowed in 20 IP with 17 strikeouts and 4 walks. Friedrich would need to win approximately half of his remaining starts to match Jason Jennings' franchise record of 14.

Baseball Prospectus | Baseball ProGUESTus: Global Warming and Home Runs: Is There a Connection?

David Dahl, happy on draft day. A photo from his twitter feed. Dahl is the Armie Hammer-looking guy in red. 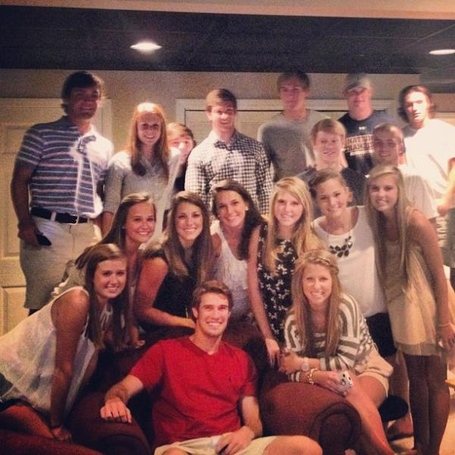