Diamondbacks 10, Rockies 0: Once the Ideal Solution, Jeremy Guthrie Has Become the Problem

Share All sharing options for: Diamondbacks 10, Rockies 0: Once the Ideal Solution, Jeremy Guthrie Has Become the Problem 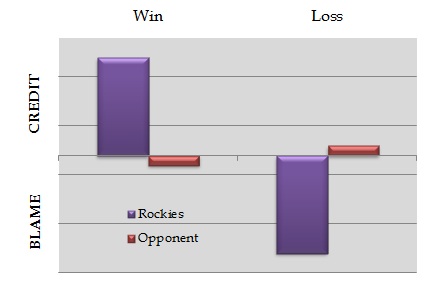 Offensively, the Rockies looked pathetic, and while it would be tempting to blame that lineup, that would be misplaced. After all, they scored 4 runs on the road yesterday after scoring roughly 9000 on the homestand. Ian Kennedy deserves some credit too. The right-hander displayed exceptional movement in striking out a career high over six innings. He walked just one - 8-hole hitter DJ LeMahieu intentionally, before striking out two with the bases loaded.

Sometimes, you run into a good pitcher having a great night. That red bar should be quite a bit taller in the credit side for Arizona's pitching.

The fanatics would not be wrong about the Rockies' pitching tonight though. Jeremy Guthrie continues to plunge to new horrifying depths. After tonight, his ERA is 6.35, and his FIP isn't any better at 6.41. He's striking out far fewer batters and walking more batters than he ever has in his career. While Indians fans may feel hookwinked with Ubaldo Jimenez' deterioration, at least he had shown signs of falling apart prior to that trade. Guthrie's implosion is just impossible to explain.

Dan O'Dowd must feel like he bought a signed Tom Seaver card on eBay, only to open the box to find a mouse eating a Mac Suzuki card.

On this night, Guthrie got pounded for 11 hits while recording just 10 outs. That's a high BABIP, but Guthrie earned every bit of it. Of the 11 hits, only two came in a pitcher's count. One hit came on a 2-2 count, one came on the first pitch, and the rest were hitter's counts. Four came on three-ball counts, including a 2-run home run by Jason Kubel on a 3-0 pitch. Jeremy Guthrie very much has been hurting himself. He has no out pitch, cannot find the strike zone and has lost command within the strike zone.

At this point, he has tarnished his trade value to nil, and he is owed more than $5million. He has allowed 13 runs (9 earned) in his last two road starts, so it is no longer just a Coors affliction. Barring an injury coming to light, Dan O'Dowd may have a difficult decision coming.