Alas, for the first time this season, the Rockies have failed to win on a Wednesday. Up until this point, the only Rockies Wednesday loss came on a day where they won half of a double header, keeping the win streak alive.

The Diamondbacks started off by picking away at a frail Josh Outman (0-2 with the loss today) before blowing the game open in the third. The Rockies were hoping Outman would last into the fifth inning tonight, but the pseudo-starter was unable to reach the fourth after allowing five runs to the Diamondbacks on seven hits and two walks during his three innings pitched. In the first inning, Paul Goldschmidt doubled in Ryan Roberts. In the second, A.J. Pollack singled in Gerardo Parra. Come the third, Outman allowed three more doubles and three more runs to the Diamondbacks, cementing his longevity to just a third of the game. The Diamondbacks scored their final run of the game on a solo home run off of reliever Adam Ottavino, who along with Josh Roenicke, Rex Brothers and Rafael Betancourt filled up the innings behind Outman..

The Rockies were unable to reach base until the fifth inning when Jason Giambi doubled to break up the no-hitter. Giambi would come around to score on a Wilin Rosario single. The Rockies were limited to just one more hit in addition to these two, a Dexter Fowler single in the sixth. Arizona starter Wade Miley did not walk anybody on top of his three hits allowed, and struck out five in his first 8 inning outing at the MLB level (he reached the eighth for the first time just last week, but only gathered one out in the inning). The rookie now has 7 wins on the year.

The Rockies are off tomorrow as they return home to prepare for the rest of interleague play. Alex White will take on C.J. Wilson on Friday at 6:40 PM Mountain. 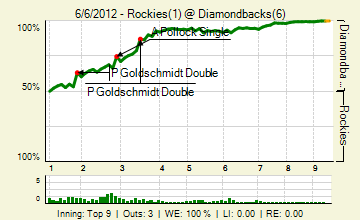