While Ian Stewart is busy getting his sour grapes into the open on Twitter, Matt Holliday is getting his revenge on the baseball diamond. Not that Holliday has anything to be bitter about, mind you, but this game did nothing but emphasize the unbelievable amounts of ownage he is able to conjure against his parent team.

Much like last night's game, the Cardinals got started immediately, this time in the form of a Holliday two-run home run that would score Allen Craig, who had singled. In the second inning, Tyler Greene smacked a baseball over the left field fence, but an interesting defensive play from Carlos Gonzalez catapulted the ball back into play without touching the stands or any fans occupying them. The play was challenged as a home run, but the original call of a ball in play was retained. Yadier Molina scored on the play, advancing St. Louis' lead to three.

Drew Pomeranz remained decidedly average during the start, allowing five hits and a walk over his four innings of work while striking out three opponents. Pomeranz has still yet to harness the depth of his skillset, but it is fair to say that this was probably his best start since early July. You can decide whether that's a good thing or not.

The Rockies got themselves on the board in the fourth. Tyler Colvin hit his sixth triple of the year, one of three hits on the night for the first baseman, and would come in on a Ramon Hernandez groundout. Hernandez was quite an offensive force in the game himself, also producing three hits, the most important of which came in the sixth when the Rockies managed to take their only lead of the game.

With Josh Roenicke having quieted the Cardinals offense for the middle of the game, the Rockies were finally able to string together some slugging efforts against Jake Westbrook. A double from Andrew Brown was followed by a double from Jordan Pacheco for the first run. Colvin tripled for the second time in the game, scoring Pacheco and trying the game. Hernandez and Eric Young Jr. would also each double in a run in the inning, putting the Rockies up by two. Young was thrown out awkwardly trying to reach third base, slowing up as he reached the bag.

Behind Roenicke, the Rockies bullpen was ineffective. Rex Brothers allowed Skip Schumaker and Daniel Descalso to reach base on a walk and a single respectively. He would yield to Matt Belisle, who was unable to stop the Holliday Train, as he sent the Cardinals back into the lead with a three run shot, his second of the game.

After a rain delay, Matt Reynolds struggled with command, walking two and allowing another St. Louis run on a wild pitch. Carlos Torres was undone by some poor defensive action in the ninth. Holliday led off with a single, and he would score after reaching third when Jordan Pacheco chose to throw the ball home. The ball was poorly received by Hernandez at the plate, and the tag was not promptly applied despite the throw beating Holliday to the plate. Carlos Beltran would also score in the inning, as Yadier Molina elongated a rundown long enough for his teammate to cross.

In the bottom of the ninth, a lone home run from Josh Rutledge, who has yet to catch Rockies Disease, was the only positive thing to see. Carlos Gonzalez struck out to end the game, ending his home hitting streak.

Belisle got the loss, and is now 3-3 out of the pen. The Rockies have lost their fifth straight game and have not won a series since before the All Star Break. Tomorrow evening, To Be Determined Alex White will be starting the final game of the series against Lance Lynn. A 25-man roster move must be made before the game to activate White. Game begins at 6:40 PM Mountain Time. 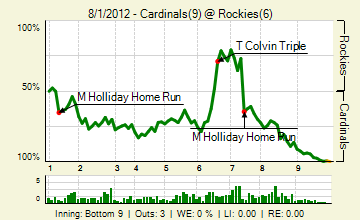