Much like the first two games in the series, the Rockies got on the board early. First inning hits from Ramon Hernandez and Chris Nelson brought in three runs, and a fourth crossed the plate in the second when Eric Young Jr. continued his insane streak with another home run. Unfortunately, the lead wasn't destined to last forever.

Guillermo Moscoso, recalled to make a spot start for a sore Drew Pomeranz, skated through trouble for three of the first four innings, but the dam collapsed in the fifth. Moscoso allowed the first four batters to reach, before being pulled in favor of overworked piggybacker Carlos Torres, who allowed two inherited runners to score. Five total runs crossed the plate, giving Milwaukee their first lead of the series. Mosocoso's final line featured four runs scoring on seven hits and three walks over four innings pitched.

The Rockies tied the game in the sixth, as Nelson singled in Carlos Gonzalez for his third RBI of the game. Torres would walk Corey hart to begin the seventh, and the Brewers punished him for the deed as he came around to score on a Nyjer Morgan single. Morgan did not have a great day on the basepaths, making two outs in the game having already reached base, but was productive against the Rockies regardless, batting in three runs of his own.

The rest of the game was quiet for the Brewers, as Will Harris quieted the Milwaukee bats in a two inning outing for his second MLB appearance. The weakened Brewers bullpen shut down the Rockies too, as Francisco Rodriguez, Manny Parra and John Axford kept the Rockies down. But come the ninth, the Brewers' bullpen reputation was fulfilled, as Jim Henderson put the Rockies in position to win.

After retiring Jonathan Herrera on strikes, a pinch hitting Wilin Rosario and a continually effective Eric Young Jr. singled, with Tyler Colvin doubling them in for the win in exciting fashion. The Rockies have swept their first three-game series of the year. Will Harris picked up his first win at the MLB level.

Tune in tomorrow as the Rockies begin a four-game series against the Miami Marlins, with Alex White opposing Ricky Nolasco at 6:30 Mountain Time. 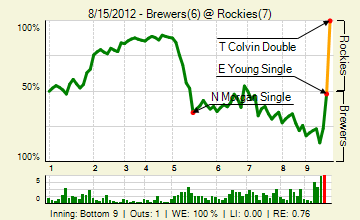 I'll take a page out of ATF's notebook and add some WPA numbers: