Know Your Foe #38: Disappointments Square Off Again in Coors Field

Share All sharing options for: Know Your Foe #38: Disappointments Square Off Again in Coors Field

This week, Michael Jong from the SB Nation Marlins' blog Fish Stripes swapped some Q&A on our respective, disappointing seasons. You can view our side of the Q&A over there!

1. So I guess the big question for you is "what on earth happened?" I'm looking through the team numbers, and there just doesn't seem to be any one particular glaring hole.

In short, almost every player on the Miami Marlins performed below their preseason expectations. The Marlins were expected to do well offensively in 2012, provided Hanley Ramirez just regressed to his mean a little and the rest of the players performed on par. Instead, five of the team's eight regular starters went well below expectations begin the season, with the total costing the Marlins fifty runs through the start of the second half. The players who did play up to expectations did not exceed them enough to make up for it.

Combine that with a late-season collapse of two of the team's starting pitchers and multiple injuries to starting players and you get exactly what happened; the Marlins went from potential contenders to trade deadline sellers. With the team trading two players and injuries taking a few others at various times, the Marlins now look like a decimated team aside from the still-good core.

The previous plan, it seemed, was to allow the Opening 2012 Marlins compete in a three-year window until 2014, at which point most of the club's contracts would have expired and the Marlins could reset their roster around Jose Reyes, Giancarlo Stanton, and Mark Buehrle. At that time, the Fish would have also received help from their productive minor league talent currently at the High-A level. But with the trades made at the deadline, those "reset" plans were shifted forward.

The Marlins did open up significant payroll space with which to tinker in 2013, and the club could make one or two additions if they are interested in moving the payroll back up to $100 million next season. So combine the reinforcements coming in 2014 and the possibility of free agent additions to fill the team's current glaring holes and there is still a chance for fringe contention in 2013, though the odds are going to be lower than they were at Opening Day 2012.

3. Between the deadline and this past offseason, if you could undo one transaction, which would it be?

Most Marlins fans would easily blurt out "Heath Bell contract" to that question, and so would I. The Bell deal was an ugly one before he suffered a collapse this season, and even though he has improved throughout the season, he still is not close to being worth his three-year, $27 million deal. The Marlins were foolish to think signing an aging closer off a bad season was going to be a good idea, and they are currently witnessing the worst-case scenario of that signing.

More past the jump, along with the usual stuff.

4. So Hanley Ramirez is gone. First, can you give us a real quick rundown on the return, and Second, how does it feel to move a guy like Hanley?

I analyzed the return after the trade and found it to be a fair deal. Hanley Ramirez was maybe worth around the value of his contract, so his trade value would have been minimal. In addition, there were definite concerns about his defense at third base after the move to the position, and if the Marlins honestly felt that his performance was not going to be better than league average at the plate with below average defense, the team was right to find value and re-appropriate the money of his contract elsewhere. Nathan Eovaldi was a top 100 pitching by Baseball America heading into the season, and he has performed admirably in the majors despite control struggles. With time and some coaching, he can definitely succeed at the big league level.

How did it feel to trade Ramirez? Depends on who you ask. I honored Ramirez's legacy as a Marlin and was disappointed to see him go, but I understood the baseball aspect of the move. Others who were on Ramirez's case for so-called "attitude" issues were ecstatic to see a player who had become a "clubhouse cancer" be traded; that contingent of fans has been on Ramirez's case since 2010. Hanley Ramirez was a divisive player to the Marlins fan base, but the basic feelings were the two listed above.

But honestly, I get that question all the time, and the answer is always "no, the Marlins are not trading Giancarlo Stanton." Or, as Jose Reyes puts it: 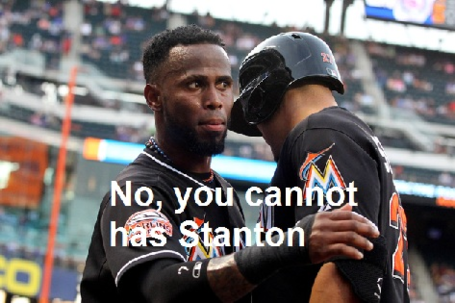