Wilin Rosario is a 23 year old rookie catcher - that is not the type of player we can properly define going forward. Yet Rosario has made very bold statements of who he is to Colorado fans and Rockies brass, and those statements have been extreme. Consider:

So basically, Rosario has elite power. He also has a .291 OBP, thanks to low contact and low walk rates, which is a notable concern. As Resolution has pointed out though, those rates are trending in a positive direction. That table looked even better before he struck out three times last night.
Wilin Rosario has an elite tool at a premium position with an improving approach. That is the good news.
The bad news is that Rosario has 14 passed balls and has failed to block 42 wild pitches. Catcher defense is difficult to measure, but those numbers decrease pitcher confidence. He has thrown out 27 would-be base-stealers, 5th most in MLB, but his work behind the plate otherwise has been the question.
While his improving walk rates and steady power are nice, it will be critical to see how Rosario progresses defensively behind the plate. He does not profile well at first or third base, so the most important development for his bat might just be his defense.

.
Rockies hit their stride after front office is rearranged - The Denver Post Correlation yes. Causation? Who knows. If Colorado's resurgence in August is due to Bill Geivett being around the team every day, great.

Josh Rutledge delivers in role as 'Baby Giambi'. Great nicknames are not made, but spontaneously born. Same goes with bad nicknames.

The Breakout Hero of the 75-Pitch Rotation, Adam Ottavino - RJ Anderson writes a Baseball Prospectus (sub req'd) piece on Adam Ottavino, suggesting his success in relief should keep him there rather than getting a shot at starting.

The Dodgers' failures in with a lineup that included Beckett, Adrian Gonzalez and Nick Punto last night led to much internet snark

You may have noticed Jordan Pacheco looks like Josh Hutcherson, aka Peeta in the Hunger Games. Pacheco's doppelganger has not gone unnoticed in the Rockies' clubhouse. Yesterday,Tyler Colvin tweeted this: 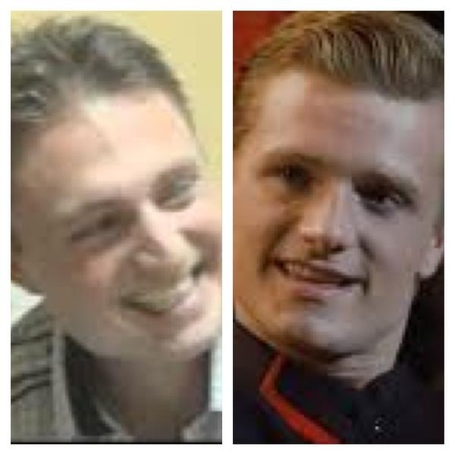