Two big innings of Dodger offense buried the Rockies too deeply for late inning heroics to overcome. Starter Drew Pomeranz began the game strongly, but fell apart in the third. Four singles around a sacrifice bunt, compounded by a Jordan Pacheco error, began the inning, with a Hanley Ramirez homer capping off the six run inning. Pomeranz' line of six hits and no walks over four innings could be worse, but the compounded nature of the offense's timing punished the lefty strongly. He was saddled with his eighth loss on the season.

Adam Ottavino continued to be effective in the piggyback tier of pitching, tossing three innings, allowing just two hits and a walk during that period, striking out three. He escaped early trouble in both of his first two innings. Meanwhile, Joe Blanton put together his best start in a Dodger uniform, suppressing the Rockies offense all the way until the seventh inning. Blanton was his usual hittable self, allowing ten singles, but one walk and five strikeouts continued his trend of improvement in those areas.Blanton would get his ninth win on the season, first as a dodger.

In the seventh, Charlie Blackmon and Tyler Colvin manufactured a run, each singling with a Dexter Fowler walk in the middle advancing Blackmon to second base, thus preventing the shutout. But things would get a lot worse in the top of the eighth. Will Harris entered the game, promptly allowing two walks and a single. James Loney's heir apparent A.J. Ellis was next to the plate, and promptly extended the Dodgers lead by four with a grand slam.

If one thing was clear about the end of this game, the Rockies really, really wanted this series. After seven innings of light production, the offense exploded in the bottom of the eighth. Four straight singles, a walk and another single, followed by a hit by pitch made up the four runs lost by the grand slam, but it didn't end there. Andrew Brown would score on a Josh Rutledge groundout. Fowler and Rutledge would score on a Carlos Gonzalez single, extended into a two-bagger on a Shane Victorino error. Dodger relievers Shawn Tolleson and Randy Choate were unable to record outs in the inning. Ronald Belisario was responsible for the final two outs.

A clean ninth from Matt Belisle kept the Rockies in striking position, and a one out single from Chris Nelson raised hopes, but in the end, a DJ LeMahieu double play would end the game, the massive third and eighth innings too much to overcome. The Rockies did manage to put a scare into the Dodgers, but that's it. Interestingly, the Rockies did not put up a single extra base hit in the game, instead producing 15 singles. Aside from the Ramirez and Ellis homers and a Juan Rivera double, the Dodgers were limited to singles as well. In all, 24 singles were hit in the game combined.

With an off day tomorrow, the Rockies continue the homestand on Friday against the San Diego Padres, who have been on fire lately. Alex White will take on Clayton Richard at 6:40 PM Mountain. 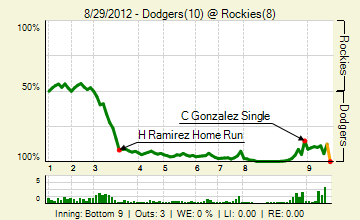