The Rockies failed to complete the sweep of the Dodgers, no surprises there. But how about that Eric Young Jr.? The outfielder got things started with an inside-the-park home run. Hits from Dexter Fowler and Tyler Colvin extended the early Rockies lead to two runs, but it wouldn't last long.

Jeff Francis continued his early game struggles, allowing Shane Victorino and Mark Ellis to reach base out of the gate. Matt Kemp, who is a dangerous opponent in any situation but who has been especially unkind to Francis in his career, completed the damage with a three run bomb. Francis contained the offense afterwards, and no more runs scored in the subsequent three innings he pitched. If not for those first three batters, the game would be entirely different. Francis has brought a whole new level to the term "slow start", but this doesn't seem like the kind of thing that's easy to coach-out of somebody.

The game was tied in the fourth, with DJ LeMahieu hitting in Jordan Pacheco, who had doubled. Unfortunately, Carlos Torres' return to long relief after shifting into a one inning situational reliever for a week was not pretty. In the fifth inning, he started off similarly to Francis, allowing Victorino, Ellis and Kemp to reach base. He then walked Hanley Ramirez, giving the Dodgers the lead back. No runs scored later that inning (somehow), but two more would cross as Torres hit Matt Treanor with a pitch and then allowed three straight singles at the end of the inning, with Matt Kemp being chased down by Josh Rutledge after attempting to reach second and being forced to retreat.

Young was a late inning producer too, with both a RBI single and probably the best outfield catch he has ever made in the seventh, but he was unable to start a rally in the ninth, and made the final out of the game.

The Rockies are off tomorrow as they travel to San Francisco. Friday, Tyler Chatwood takes on Tim Lincecum at 8:00 PM Mountain Time. See you there! Or not. 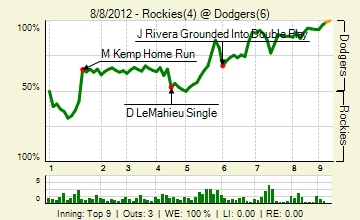