As has been oh so common in Jeff Francis' worse starts this year, the lefty starter was unable to contain the opposing offense out of the gate. Francis threw nearly 40 pitches in the first, and five runs crossed for the Giants. Marco Scutaro singled in Gregor Blanco who had led off with a triple, with hits from Buster Posey, Joaquin Arias, Hector Sanchez and Brandon Crawford rounding out the inning.

Tim Lincecum wasn't especially sharp early in the game himself, and allowed the Rockies to get one run back in the bottom of the first when Carlos Gonzalez, who reached on a walk and scored on a Wilin Rosario single after advancing to second on a balk. Rosario would add another run to the Rockies tally in the third, when he smacked his 24th home run of the year. Unfortunately, good scoring opportunities in the first and fifth innings were wasted, as the Rockies had at least two runners left on base each time.

Francis would last just three innings after exhausting his pitch count in the first, with Adam Ottavino matching those three innings in the piggyback role. He pitched well aside form the sixth, when Scutaro, the newest former Rockie successfully exacting revenge, singled in Crawford who had doubled to lead off the inning. The Rockies retaliated in the bottom of the inning as Chris Nelson was doubled in by pinch hitter Charlie Blackmon.

Will Harris, Josh Outman and Edgmer Escalona combined for two innings of withdrawal for the Giants offense, but they would re-emerge in the ninth against Josh Roenicke. Scutaro would once again be in the center of the action, singling and coming around to score an insurance run for San Francisco on a Hunter Pence triple. Pence himself would cross the plate on an Arias sacrifice fly. The Rockies were unable to score any runs off of the seven pitchers that scattered the final three innings from the San Francisco bullpen.

The Rocies enjoy their final off day of the season tomorrow, as they travel to San Diego to begin a series on Friday, with Andrew Cashner opposing Tyler Chatwood in game 1 at 8:00 PM Mountain. 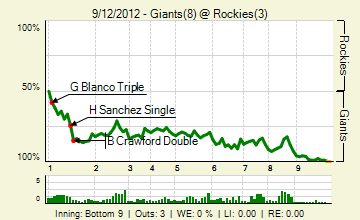