I don't really know how much more there is to say at this point. The Rockies played a baseball game, and they lost, 7-1 in this case since I didn't give it away in the title.

Tyler Chatwood got off to a rotten start by allowing the first two opponents to reach base, followed up by a Pablo Sandoval home run to give the Giants and early 3-0 lead. That's all the Giants would really have needed, but it didn't end up stopping there. The Rockies got one run back in the top of the fifth, when Chris Nelson (who had another multi-hit game) scored on a DJ LeMahieu sacrifice fly. Nelson and Charlie Blackmon combined for all four Rockies hits, though Dexter Fowler did walk three times.

The Giants would break things back open in the bottom of the inning. Sandoval singled against Adam Ottavino, having relieved Chatwood. He would attempt to steal second base, and on a Wilin Rosario error, his first stolen base of the year ended with him at third base. He came around to score on a Brandon Belt double, and a Gregor Blanco single knocked in both belt and Hunter Pence to increase the San Francisco lead to 6-1. Ottavino was removed after just the one inning in favor of Edgmer Escalona, who allowed a seventh Giants run as Buster Posey singled in Angel Pagan

Chatwood demonstrated good control during his time on the mound... maybe too good. For the first time since August 14th, Chatwood did not walk a batter, but the eight hits he allowed over those four innings were the highest since August 18th. Matt Cain, meanwhile, walked for batters (well, three of which were Fowler, but Josh Rutledge's sudden ability to take a walk is also notable) but allowed only four hits, and while Chatwood's strikeout numbers remained a stagnant pair, Cain struck out eight Rockies and also lasted eight innings, with Jose Mijares pitching the ninth.

Matt Reynolds and Rob Scahill pitched nice innings, so there's that I guess. 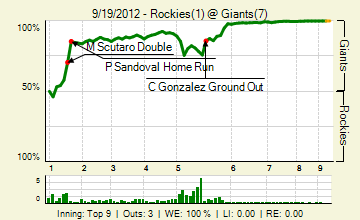