Evening rainstorms continued, but this time the game was able to be completed, with the Rockies once again on top, moving them one step closer to avoiding the second overall draft pick.

Drew Pomeranz turned in his best performance since he last faced the Cubs in August. Though he walked three batters, he was more effective with his pitches, which allowed him to outlast the opposing starter for the first time in what seems like eons. Lasting through the fith inning, Pomeranz struck out three and also allowed three hits. He also notched a double for himself at the plate. He finally secured his second win of the season.

The Rockies offense got started right away. Charlie Blackmon walked in the first inning, with a Jordan Pacheco double sending him home. After advancing to third on a Wilin Rosario groundout, Pacheco also scored on a Tyler Colvin single. The Rockies added the other four runs in the third inning, beginning with a Blackmon home run, his second at the MLB level this year. Chris Nelson singled in Pacheco and Rosario later in the inning, with Colvin scoring the final run as Andrew Brown grounded into a double play.

Alex White was effective for two innings, rebounding from his previous relief outing. After setting down all but two batters he faced, the storms crossed Denver and forced a significant rain delay. The game eventually resumed, but the score remained the same as Rob Scahill kept the shutout alive in the final two innings 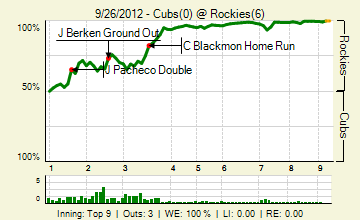