Something caught my eye while perusing Fangraphs the other day. Opposing batters have a .321 BABIP against Rockies pitching this season. By itself, I guess it’s not all that shocking. Colorado has an absolutely awful rotation and plays in the BABIP capital of the universe, so scars in this category should always be expected. However, a .321 BABIP allowed against is ridiculous!!! Not only is it the highest in all of baseball this season, it’s the second highest BABIP against allowed by Rockies pitching in franchise history – Second only to the 1999 team which holds just about every horrifying pitching record you’re ever going to find this side of the moon.

There’s something else going on here helping drive that number up, and you don’t have to look far to find it. The Rockies defense is a complete and total disaster. It’s rather obvious from the eye test, and the metrics more than confirm it. Below is a table showing where the three major defensive metrics (Ultimate Zone Rating – "UZR", Defensive Runs Saved "DRS", and "Total Zone"), rank the Rockies defense over the last several seasons. The first row alongside each year measures the number of runs above or below average each metric ranked the Rockies defense that season while the second row under each year ranks the Rockies defense vs. the rest of MLB . (The final column on the right averages the three defensive metrics for each season and is what I prefer to use as it helps flush out some of the biases each metrics might try and sell.) 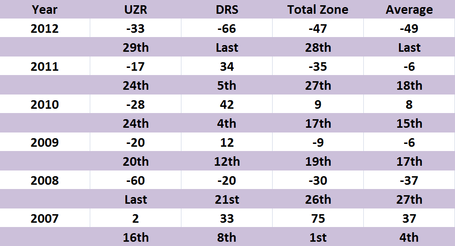 Take some of these with a grain of salt. Every metric has its biases and sample size can often be an issue. However, when all three defensive metrics suggest similar things, you should probably start taking notice. Using these metrics and my own eye test, here’s some of the biggest problems I see this season.

1) We’ve Lost Our Edge at Shortstop. In past seasons, you could pencil in a +10 or +15 runs defensively at shortstop and not even blink with Tulo manning the position. But this year, Tulo didn’t play like Tulo when he was in there and his absence has created a lot of shuffling at that position. The result has been negative run production in a place we're used to lapping the field.

2) Jordan Pacheco and Chris Nelson are Getting a Lot of Playing Time. I’m sure this wasn’t the plan, but injuries and a lack of roster depth has allowed these two to pile up innings in the field, and when that happens, you’re just asking for trouble.

3) The Loss of Todd Helton. Some of this overlaps with point #2 and Pacheco playing 1B, but Todd Helton has been a rock defensively for this team for over a decade, and while not everyone has done poorly here, the loss of Todd still hurts.

4) Cargo's Lost Season in Left Field. Say what you want about outfielders, Coors Field, and defensive metrics but Cargo has had the worst season defensively of his career according to all of these metrics, and they never really hated him before 2012. With that said, I’d much rather have a healthy Cargo than a good defensive Cargo who ends up on the DL after running into walls. This season he’s played more cautious and has been much better of late at finding the right balance. Most of the negative numbers you see from him came from the first half of the season. I expect him to only get better when it comes to finding this line going forward.

5) Catcher. The defensive metrics often don’t know how to handle catchers very well (or in UZR’s case at all), but it shouldn’t take a genius to figure out that Ramon Hernandez is below average and that Wilin Rosario still has a ways to go before he’s truly ready defensively. He can get there though as several aspects of his game are trending in the right direction.

6) D.J. LeMahieu is Leading the Rockies defensively in All Three Metrics. This is great for him, and his noticeable strides in the field deserve more positive recognition than it’s gotten, but let’s face it - If D.J. LeMahieu is the best defender on your team, it says a lot about the rest of your team defensively doesn’t it?

Links after the jump.

Troy Tulowitzki will continue his rehab assignment this week in Tulsa as they start their playoff series against Springfield tomorrow. He’s scheduled to play five innings at short stop on Wednesday and seven on Thursday. I find this whole thing to be quite cruel actually. Before the season started I told the baseball gods that as long as I got to see Tulo and Arenado play a playoff game together this year, I’d be a happy camper. Real funny baseball gods, real funny…

Cargo talks about the challenges of getting pitched to differently without his bash brother in the lineup in this piece from Troy Renck. It sounds like he misses Tulo. I can’t blame him.

This article highlights Jason Giambi’s return and also has a couple of other good nuggets of Rockies information.

I still can’t believe this is happening, but the Nationals are going forward with the plan to shut down Stephen Strasburg when he reaches his innings limit. They are giving him two more starts and then shutting him down after September 12th. I really feel like they are going to end up regretting this move.

STOP THE PRESSES FOLKS!!! That once seemingly insurmountable Yankee lead which stood at 10 games in late July is almost gone! After a 4-3 loss to the Rays yesterday afternoon, New York’s cushion over Baltimore is down to just a single game – And oh by they way, they play each other this weekend. Get your popcorn ready! This is getting good!!!

This Day in Rockies History: September 4th, 2006 – Troy Tulowitzki hits his first ever major league home run, a fifth inning blast in San Diego that tied the game at three.