In the first six and two thirds innings of this game, Rockies pitching in the form of Alex White and Adam Ottavino walked seven batters while striking out none. Amount of runs scored in that period? One unearned Braves run, that would prove to be the difference maker in this oddball low scoring game.

Mike Minor, who has demonstrated superb walk raters over the second half of the season, didn't feature his best control either, walking four of his own. The starter limited the Rockies to just one hit, which would lead to the Rockies' unfortunate downfall, as the Rockies' best chance for scoring runs was going to be to take advantage of a pitcher whose biggest weakness is giving up too many line drives.

It's hard to write a summary for a game in which basically nothing happened, but here's my best attempt. White began the fourth inning with a single by Chipper Jones, one of two hits on the night against him, followed by a walk to Freddie Freeman. White escaped a similar predicament in the first inning with a series of soft groundball outs, and he attempted the same here, inducing a double play ball to DJ LeMahieu at second base. Josh Rutledge received the feed for one, but the ball ended up thrown away on the delivery to first, allowing Jones to score the only run of the game.

The Rockies were unable to collect a until the seventh inning, when Jordan Pacheco broke up the no hitter. The second Rockies hit would come from Rutledge, moving Dexter Fowler who had walked into scoring position in the eighth. The Rockies had an opportunity to score when a crossup with catcher Brian McCann and reliever Eric O'Flahrety sent a ball bound for the backstop, but the presence of the umpire behind the plate prevented the baseball from proceeding far enough away for a run to cross the plate.

Craig Kimbrel, who I am officially naming the Crooked Scarecrow, finished the game with only a walk to Jason Giambi giving hope to Rockies faithful. Will Harris and Matt Reynolds deserve a mention for their effective pitching to end the game, so much so that they ended up being two of the WPA heroes for the game. Ouch.

Tomorrow, the Rockies will conclude this series as Jhoulys Chacin takes on Tim Hudson 10:10 AM Mountain time. Eek, glad I don't have to cover that game. 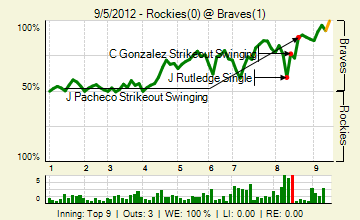