A User’s Guide to the Cactus League – Part 1

Next month, 15 major league teams—including the Rockies—will be just a 90-minute flight from Denver. Here’s Part 1 of a 3-part series on taking advantage of the Cactus League.

Share All sharing options for: A User’s Guide to the Cactus League – Part 1

Pitchers and catchers report to Spring Training in under a month. Rockies position players will arrive in Scottsdale shortly thereafter, with the first Spring Training game set for February 23, just six short weeks away. And the Rockies won't be alone in the desert. Fourteen other major-league clubs practice and play in the Valley of the Sun.

Spring Training is a terrific experience for a baseball fan. The accessibility of players, the opportunity to see rising talent, and witnessing first-hand your team's preparation for the new season-all of these are reasons enough to make the trip. For sentimentalists like me, Spring Training also is an opportunity to absorb baseball and all that it evokes before the season begins. Even better, the games don't count, febrile rivalries remain cool, and the delight of fans in every park is infectious.

If you're considering a trip to see the Rockies, this is a three-part user's guide offering some help with planning. Today's Part 1 covers the factors for deciding when to go to Phoenix. Part 2 tomorrow will review where to go, namely, the parks you might visit while you're in the Valley. In Part 3 on Wednesday, I'll offer some ideas about where to stay and things to do when you're not watching baseball.

For now, here are some thoughts on planning when to travel to Spring Training. Since this is a Rockies-centric take on the Cactus League, planning starts with the Rockies' schedule: 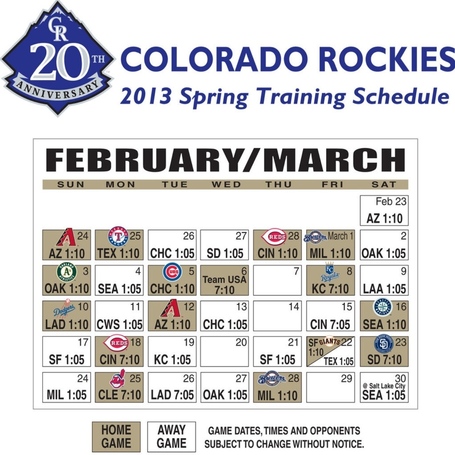 Many people plan weekend trips to catch games on Friday, Saturday and Sunday, so here are some thoughts on the Rockies' weekend games:

* March 1-3 is a great early weekend for Spring Training. The Rockies host two games at Salt River Fields this weekend, with an away game on Saturday afternoon at Phoenix Municipal. Phoenix Muni is in the East Valley and an easy drive or cab ride from Scottsdale. The only downside is that two of the Rockies' three games are against Oakland, so you lose a little variety.

* March 8-10 also is a great weekend for Rockies baseball, but presents a dilemma for baseball fans. The Rockies play two home games, including one night game on Friday, and their away game on Saturday afternoon is at Tempe Diablo Stadium. Like Phoenix Muni, it's a quick drive or cab ride from Scottsdale. What makes this weekend nettlesome is that the World Baseball Classic is going on at the same time. Phoenix hosts one of the first-round pools on March 8-10, with USA, Mexico, Canada and Italy squaring off in a round robin. If you're interested in seeing the WBC, this is a great time to go to Phoenix but, unfortunately, two of Team USA's three games conflict with Rockies games. Tough choice, unless you're not interested in the WBC (or Team USA), in which case, you'll have a great time at Salt River.

* March 15-17 is probably the least desirable weekend for seeing the Rockies at Spring Training this year. The Rockies play Cincinnati on Friday, March 15, but the game is in Goodyear, a 45-minute drive from Scottsdale, so you'll need to rent a car. Colorado returns home to play the Mariners on March 16, and plays at Scottsdale Stadium against the Giants on Sunday, March 17. While Scottsdale Stadium is nearby, tickets are expensive and can be difficult to get. As of now, only lawn seats are available for this game. If you have some flexibility with your schedule, this would be a weekend to avoid.

* March 22-24 is another great weekend for seeing the Rockies. They play at Salt River Fields on Friday and Saturday, and then travel to Maryvale to play the Brewers on Sunday. Maryvale is an easy drive if you rent a car, and just close enough for a reasonable cab ride if you're splitting the fare with someone. It's also an underrated Spring Training park.

So with the exception of the weekend of March 15-17, this is a great year to see the Rockies in action for Spring Training. For the most part, there's no wrong time to go, so long as there are tickets available (check before booking on the home teams' websites). And this year there are several weekends where the Rockies play evening games, which frees up the afternoon to catch another Spring Training game in a different park.

For this reason, it's helpful to know when and where the Rockies are playing in other parks, and whether those parks are worth visiting. In Part 2, I'll review the Cactus League ballparks and offer some thoughts that might influence how you plan for your trip, whether this year or in the years ahead.

A User’s Guide to the Cactus League