Outfield holds the deepest group of talent in the Rockies system. Headlined by first round picks and a 21 year old with major league exposure, there's a lot to get excited about in the greenest part of the ballpark.

This article continues with part two of the rankings of Rockies prospects by position, part one focused on middle-infielders. As with the previous article, it leaves out players like Charles Blackmon who have graduated into the major leagues.

Corey Dickerson dominated the counting stats among Rockies outfielders finishing second in home runs with 22, third in triples with 7 and his 40 doubles nearly doubled that of second place Tim Wheeler's 27. Kyle Parker and David Dahl sliced up the remaining stats where Dahl lead outfielders with a .370 Average, an OBP of .423 and a .625 Slugging Percentage. Meanwhile Kyle Parker lead all outfielders in Isolated Slugging at .255. Rafael Ortega dominated the speed category with 36 steals.

1. Kyle Parker (2010, 1st Rd)
Big right-handed hitter with a swing that reminds me of Matt Holliday. He drives pitches to all parts of the park, and has prodigious power averaging a home run every 20 plate appearances. Parker led all Rockies outfielders with 23 home runs, one fewer than Mark McGwire hit as a 21 year old while playing in Modesto. Defensively Parker has a strong arm and plays a solid right field. He shows the ability to take a walk and his on base percentage of .415 was 107 points higher than his batting average, only one other Rockies outfielder can make that claim. At 23 years old Parker will be age appropriate entering the Texas League for the Drillers and while the Rockies are slow to promote at the lower levels, things tend to happen quickly once a player reaches Double-A. Video of Parker

2. David Dahl (2012, 1st Rd)
After being drafted in 2012, Dahl set the Pioneer League on fire leading the league with a 1.035 OPS. David has the ability to drive the ball to all fields and he battles at the plate. Has yet to develop the power of some outfielders, he averages a home run every 34 plate appearances, but is young enough to grow into a higher power plateau. Plays a solid centerfield, but gave way to Max White towards the end of the season and played more games in leftfield. Will be entering Asheville at the age of 19, well below age level for the SAL league. Video of Dahl

Debuted with the Rockies in an emergency role at the end of the 2012 season, but played in only two games leaving him eligible for this list. Shows the natural talent to play everyday in centerfield, Ortega regularly runs down balls hit into the gap. Gifted with a strong arm, he once threw out Aubrey Huff at homeplate, ok not the best example, but he lead the CAL league with 19 assists, 7 more than the next best outfielder. Shows the ability to hit for gap power to all fields. Will most likely play 2013 in Tulsa at the age of 22 and be one of the youngest fielders on the team. Video of Ortega

4. Corey Dickerson (2010, 8th Rd also drafted by the Rockies in 2009, 29th Rd)
Has hit well at every level in the Rockies system and impressed the front office enough to earn a mid-season promotion to Double-A Tulsa, a rarity in the Rockies system. Dickerson showed incredible consistency while in Modesto where he hit safely in 52 of 60 games. His career ISO of .285 is drool-worthy and Corey made my list as a Possible Future 40 HR player. Could possibly start 2013 in Triple-A, but will most likely return to Tulsa where he will be on a fast-track to the Major Leagues depending on his performance. No audio, but this video shows Dickerson nearly clearing the stadium with a drive to rightfield. Video of Dickerson opposite field home run.

5. Tim Wheeler (2009, 1st Rd)
Tall and strong, he used Tulsa's short left porch to slug 33 home runs in Double-A Tulsa the previous season. Possibly due to an injured hammate, Wheeler produced a disappointing two home runs this year, but showed decent contact with a .303 Average and 27 doubles. Tim has steadily improved his Average over the past three seasons from .249 in Modesto to .287 in Tulsa and finally .303 in Colorado Springs. Yet his power has been inconsistent ranging from a mere .384 in Modesto to .535 in Tulsa. At 25 years old and a repeat in Triple-A, this will most likely be Wheeler's last season on the Rockies radar as a prospect, Video of Wheeler.

6. Julian Yan (FA, DSL Debut at 17 years old)
Showed tremendous power in Grand Junction hitting 17 home runs at a pace that would have yielded over 30 in a full season. Looking deeper into Yan's power numbers are even more impressive, 30% of his fly balls went out of the park and nearly 9% of his contact yielded a home run, leading all Rockies minor leaguers in those two categories. Defensively Yan has a strong arm and covers a lot of ground in rightfield. At 21 years old, Asheville should provide a good test for the young Dominican. Video of Yan.

7. Ryan Garvey (2012, 33rd Rd)
Impressive season cut short by injury saw Garvey tie Kyle Parker with the highest ISO among Rockies outfielders at .255. Only 19 so his age fit well in Short-season Grand Junction. Next season will show if his numbers were the result of a SSS hot streak or the real deal. Be sure to mute the audio before watching this video of Garvey.

8. Raimel Tapia (FA, DSL Debut at 17 years old)
Posted a higher batting average for the Dominican Rockies than any previous fielder since Rafael Ortega hit .324 in 2009. Only 18, has the hit tool and on base skills to move to Grand Junction. Has bulked up and added muscle in the offseason, Tapia is a player to keep an eye on in 2013.

9. David Kandilas (FA, Casper Debut at 18 years old)
Young Australian limited by injuries in 2012, has on-base skills and a decent bat. His 22 doubles ranked as one of the leaders among Rockies outfielders. Has a rifle for an arm and recorded 6 outfield assists in limited duty. Currently starring for the Sydney Blue Sox in the Australian Baseball League, Kandilas is posting a slash line of .328/.391/.448 for an OPS of of .839 in 14 games. Video of Kandilas.

10. Kyle Von Tungeln (2012, 13th Rd)
Exploded into the Tri Cities organization with a .939 OPS in July, before slumping to a .671 OPS in August/September. Even though his bat slumped it was nice to see a walk rate that results in a .401 OBP, with nearly as many walks as strikeouts. At 22 Kyle will be slightly old for the SAL League in Low-A Asheville. Video of KVT. 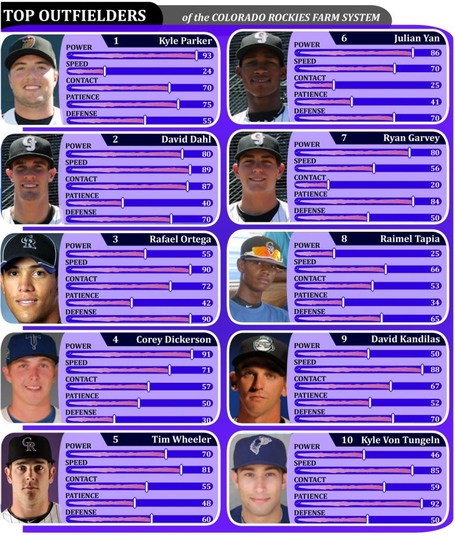 Possible Conversions to the Outfield

Rosell Herrera - (FA, DSL Debut at 17yr)
A switch-hitting phenom who swings better from the left side. Herrera has been tabbed as a possible 5-tool prospect. Reports suggest Herrera's skillset could transition seamlessly to the outfield.

Outfield prospects to keep a weathered eye on:

Max White (2012, 2nd Rd)
Showed quick hands to the pull side in batting practice. The 18 year old struggled in Grand Junction, but finished hot with a .212 ISO in the final month of the season. Will most likely repeat in Grand Junction, where at 19 years old he'll be young for the Pioneer League.

Carl Thomore (2011, 2nd Rd)
Drafted with an injured ankle, was once again injured in 2012. Posted a .783 OPS in his final month after receiving regular playing time at Grand Junction. Moved to Scottsdale with David Dahl over the winter where they work out together at the Rockies Salt River complex. Could move to Low-A Asheville if he produces a strong Spring and at 20 he'll be on pace at the SAL League.

Delta Cleary (2008, 37th Rd)
Performed well in Asheville before seeing his strikeout rates jump after a mid-season promotion to Modesto. Needs to reduce his strikeouts and improve his on base skills. Covers a lot of ground in center and leftfield and has recorded at least 10 outfield assists in each of his last three seasons. Will most likely repeat in Modesto for his third year, with an option for a mid-season promotion. At 23 Cleary is old for the CAL League, but his athleticism alone warrants consideration for this list.

Tyler Massey (2008, 14th Rd)
Has shown speed on the basepaths with 21 doubles and 22 stolen bases. Hits well with very little power, .292 AVG with 10 home runs in Asheville. Last season was Massey's third try with Asheville and he should receive a chance in 2013 to test the CAL league at High-A Modesto, in which time he will turn 24 during the season.

Who is your favorite Rockies MiLB Outfielder?