The lingo every Rockies fan should know.

Share All sharing options for: Friday Rockpile: The Rockies dictionary

A couple days ago, Grantland published an article describing some of the baseball jargon the internet-savvy reader might come across. It's a fun read, filled with both important statistics (WAR, K%, Defensive efficiency) and jokes (Heath Bell Experience). It's important to keep up with the cutting edge of internet snark after all.

Which got me thinking...what kind of annoying memes does the Rockies fan come across? Every franchise has their own quirks and inside jokes, and in the interest of posterity, I've listed the Rockies-related quips that always seem to pop up on message boards. If I've forgotten any (probable), feel free to chime in.

When asking a casual baseball fan about the Colorado Rockies, their first thought is usually: "Who? Is that a team?" When querying a more serious fan about the boys in purple though, they immediately associate the team with playing at Coors Field; in other words, altitude and inflated offensive statistics.

And, well, they're not wrong. Baseballs fly farther at 5,000 feet; it's an immutable fact or physics. Furthermore, Coors Field has the biggest outfield in the game, to try to keep home run totals somewhat reined in; but that just encourages more bloop singles in front of outfielders. Even post-humidor, when baseballs are kept in a humid environment to combat the dryness, Coors has been the most offensive-oriented park almost every year.

So, understandably, this creates some weird situations. When hitters have awesome seasons here, their contributions are frequently brushed off as being a product of their environment; even when park adjustments agree that they were still awesome. The only thing an annoyed Rockies fan can do in response to the dismissive national media is be dismissive in return: LOLCORZ, and a roll of the eyes.

A LOLCORZ can also be appropriate when a can-of-corn fly ball drops in front of an outfielder playing deep or when a home run sneaks over the right field scoreboard. Basically, whenever something happens at Mile High that wouldn't happen elsewhere, a LOLCORZ is the only reaction.

The worst thing though is when a pitcher has a really good season for the Rockies and he still doesn't get much respect. I mean, come on guys. It's a two-way street.

Blaming the owners for a team's woes is a time-honored tradition. In this case, the Brothers Monfort, Dick and Charlie, are the frequent targets of a Rockies fan's ire (though in 2011 Charlie ceded most of his duties to Dick).

It's debatable whether assigning blame to an owner actually makes sense. Essentially they're the money bags; it's the General Manager and his scouting/statistics squad that actually build the team. There might be some owner input involved in player acquisition as well, but it's hard (maybe impossible) to know when the owner overrides the GM.

The biggest gripe most fans have about the Rockies though, is payroll. The Rockies pretty consistently are in the bottom half of MLB in terms of spending. While no fan is particularly thrilled about this, it's probably just a function of the market. Denver isn't Los Angeles or New York.

But the casual fan doesn't want to hear this. He thinks that if the owner would just open his inexhaustible money-bags and shell out for the big time Free Agent du jour, the Rockies would turn into a contender. If we just outbid everyone for Albert Pujols and Josh Hamilton, they reason, then we'd be cruising to NL West titles. So a particularly vindictive fan (shrouded in the anonymity of the internet) comes up with an unflattering name for these "greedy" owners: "the Monfarts". It combines an easy spelling error with a childish derogatory insult. And thus, a meme is born.

(Of course, there's a further irony involved in that the Monforts own a meatpacking business in Greeley, Colorado, an area that is well known for its...aroma).

Dinger is the worst mascot in professional sports and is a continual embarrassment to Rockies fans everywhere. It's so bad that I can barely watch the bottom of the 9th inning when he camps behind home plate and makes googley-eyes at the closer. Seriously, who is in charge of this guy? Gah. 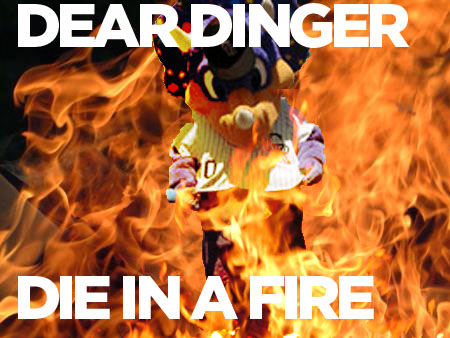 We all pretty much agree that the internet is the worst thing in the world. So Root Sports, in their infinite wisdom, decided to funnel the internet straight to their broadcast. in the fifth inning of every game, they ran a crawl on the bottom of the screen where random fans could tweet/text their questions and observations to the broadcast, and they would show these nuggets of brilliance to the wide world.

And, well, it was bad. Toyota Talk, as it was called, featured people with opinions that often didn't make a whole lot of sense. These messages typically did not have particularly good grammar, or punctuation, or spelling. And they were usually self-aggrandizing and signed with (first name) in (location).

BobInBoulder is the signature that the exasperated viewer decides is the perfect simulacrum of the whole sorry affair. When a Toyota Talker opines that, "I REALLY LIKE THIS MANSHIP GUY I THINK HE'S A BIT PART OF THE FUTURE", it's BobInBoulder. When another says, "IT'S MY BERTHDAY I WANT A ROCKIES WINNNNNN!!!!" it's BobInBoulder. When someone asks if we can trade Alan Johnson and Jonathan Herrera for David Price, it's Woody Paige BobInBoulder.

We also have an ALCS, and it's Boston vs. Detroit. It seems this will be a post season without an underdog.