Monday Rockpile: The importance of depth

The Rockies must surround Troy Tulowitzki and Carlos Gonzalez with more players who actually belong in the majors.

Share All sharing options for: Monday Rockpile: The importance of depth

The Rockies have an unusual problem. They are a bad team with a strong core of players. It's interesting because usually bad teams lack strong cores and require a long rebuilding process. In this case however, the Rockies have actually accomplished the hard part.

Getting stars like Troy Tulowitzki and Carlos Gonzalez is hard, and locking them up through their primes is even harder. Getting a top of the rotation to pitch as well as Jhoulys Chacin, Jorge De La Rosa, and Tyler Chatwood did this season is hard. Look no further than the rest of Rockies history and you would be hard-pressed a moment where their top three arms were as good as they were in 2013 (when healthy). Getting a closer as dominant and as reasonably priced as Rex Brothers is hard, especially when you consider what guys less effective than him have fetched on the free agent market.

This is part of the reason why the Rockies are so fantastically frustrating right now. They finished in the NL West cellar, but have several players easily associated with the foundation of a winning team. This isn't a San Diego Padres situation where Chris Denorfia is leading the team in wins above replacement and you expect them to run into trouble because of a lack of firepower at the top of their roster. This is a team that looks like it should be a contender when you read off the top third of the roster, only to see the bottom fall out of it as you make your way to the bench, back of the rotation, and bullpen.

In his Sunday piece, Troy Renck touched on Colorado's lack of depth problems, citing several reserve players who under-performed. He closes his thoughts by stating that the Rockies need better players, particularly at the back end of the roster, and he's absolutely correct.

I don't have enough time today to go through all muck at the bottom of the roster again, so I'll just leave a link from an August Rockpile where we went over similar issues.

Instead, I'll bring up a table that shows just how important the bench bats are to building a successful team. What I've done here take the last ten editions of the Rockies and split all of the non pitcher plate appearances into two categories. First, you have the number of plate appearances taken by the "top eight" players (the eight guys who started the most games at each position on the diamond), and then you have everybody else or the "bench".

Now there's going to be many different reasons a player's plate appearances went in the bench category. Maybe they really are just the 25th man on the roster, maybe they are filling in for an injured star, or maybe they are actually a really good player but didn't get called up early enough to record the most games at their position. The "why" is not all that important here though, because the point of this table is to show just now many plate appearances are not taken by the guys we typically tend to associate with eight everyday positions on the diamond.

Note: I've also included a "percentage" column to indicate exactly how much of the non pitcher plate appearances the top eight guys were responsible for each season. 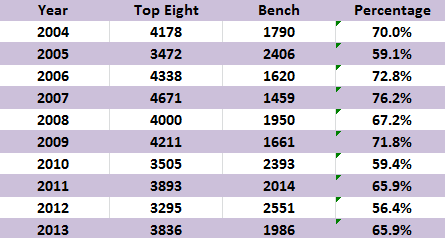 So if you're not surrounding these guys with at least mediocre players, there's nothing they can do to stop the ship from sinking. This is why players like Charlie Blackmon, Corey Dickerson, and Josh Rutledge are so, so important going forward. They may not get the most starts at a position, but they will certainly get their at bats and help determine the success level of this team.

Part of the reason why the 2009 Rockies were so successful is they had four outfielders (Cargo, Hawpe, Smith, and Fowler) who posted an on base percentage of .353 or higher. The Rockies could rest guys if they were banged up, give them a day off here and there, and they would lose almost nothing production wise because they all pushed each other.

In recent years however, the Rockies have assembled paper thin talent, and once the inevitable ninth through whatever ever best position player on the roster starts to pile up at bats, the whole team gets dragged down via negative production. This is something the Rockies have to fix if they are serious about contending. Tulo and Cargo are exceptional players, but it's not fair to them if you're expecting them to make up for thousands of below average production plate appearances from the rest of the roster.

Here's the good news. Turning a roster with a strong core that's getting negative production from it's bottom third into a contender is much,much easier than turning a roster that lacks a strong core of players into a contender. However, this can only happen if the front office is serious about aggressively purging some of the biggest negative production offenders both at the plate and on the mound. (We've already seen several of them in our "Ranking the Rockies" series here at Purple Row)

If that doesn't happen, we're in for another disappointing season at 20th and Blake and this franchise will have wasted four consecutive prime years in the heart of Tulo's and Cargo's careers. The hot stove is only a few weeks away from really cranking up, and while I'm not expecting the Rockies to make a major splash for huge names, they need to ensure that they go into 2014 with significantly more depth than they did this season, or any recent season for that matter.

The Broncos honored Todd Helton yesterday before their game against the Jacksonville Jaguars.

In Game 2 of last night's ALCS, the Red Sox stormed back from a 5-0 deficit and tied the game on a David Ortiz grand slam before winning the game in the bottom of the ninth to tie the series at one game a piece and aviod facing Justing Verlander in Detroit while stuck in a 2-0 hole. Ortiz's slam was the latest game tying granny in MLB postseason history