High payroll teams keep winning the World Series, but should that still be happening?

The Red Sox vs. Cardinals World Series is not the match up most commenters here at Purple Row wanted, but it's interesting from the standpoint that it will unofficially establish baseball's most dominant franchise over the last decade. If the Red Sox win, it will be three titles in ten years. If the Cardinals win, it will be three titles in eight years including two of the last three.

One of the big reasons several here have noted when voicing their displeasure in this World Series match up is that they are just sick of seeing the same big market teams finding success over and over again, which leads me to the interesting situation baseball has on it's hands - The big payroll teams keep winning the World Series. Not that this is totally unexpected, but in an age when the small market teams are becoming competitive in large numbers, it does seem odd that none of them have found a way to get a ring yet. 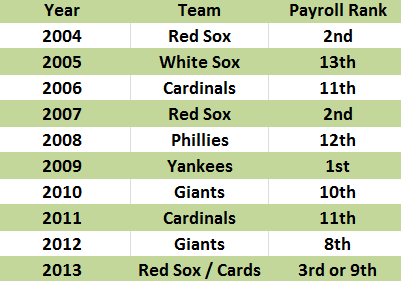 No team lower than 13th in payroll has won the World Series since 2003, and the Marlins team that did it was the perfect example of a one and done success story. A team that didn't win its division, got hot at the right time, and had to sell off all its pieces immediately following the title. What I'm more interested in though is seeing if teams in the lower half of the resource column can find some consistent success while breaking through and winning a title, and despite as much success as ever in the regular season from these low budget teams over the last two seasons, it has not translated to postseason success.

Postseason baseball is supposed to be a big crapshoot, where anything can happen and for the most part has happened. However over the last two seasons, that wild nature of the beast has actually worked against the lower payroll teams. Maybe it's just a coincidence, but when you look at it closely, it seems strange that not one of the underdogs were able to make it further than they did once the post season began these last two Octobers.

In 2012, you had the Reds (17th in payroll), the Orioles (19th), the Nationals (20th), the Rays (25th), and the A's (29th) all win at least 90 games, and all but the Rays made it into a postseason series. However, all four lost in the division round, and not only that, they all lost in the division round in five games. One baseball game to decide if you're moving on, one of the most unpredictable things in all of sports, and yet all of the small market teams lost.

This shouldn't be happening, or at least it should not continue with the current system we have in place. Baseball has successfully found a way to make its small market teams competitive in the big picture, but for whatever reason, they all seem to fail in the postseason.

Now of course, that list of the last ten years with the World Series winners and payrolls could look very different if the Rockies (25th in payroll in 2007) or the Rays (29th in payroll in 2008) were able to win the World Series on top of their pennant. Those are good examples of teams on the lower half of the payroll scale having success in the postseason, just not the ultimate success.

It's extremely difficult to draw any conclusions as these post season series are such tiny sample sizes of baseball and all the teams change so much from year to year, but it will be interesting to see if this trend continues in the coming seasons and if there really is some unknown advantage to having a higher payroll in October after it's proved less meaningful than ever during the regular season.

I do know this much, the Cardinals getting to pitch Adam Wainwright twice against the Pirates and the Tigers getting to pitch Justin Verlander twice against the A's in a five game series does give them a huge advantage, but whether you want to attribute their presence with their current team as part of payroll or not is a tough call. Both players have only played for one team in their entire career and have plenty of post season experience with that team, but both players also were signed to massive extensions so you could argue it both ways.

Just for reference in the discussions we may have here today, here's the Rockies payroll rank over the last ten seasons... 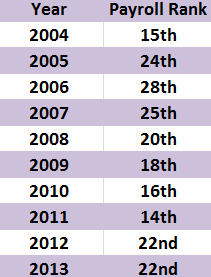 There's several interesting notes from Troy Renck's Sunday piece. The headliner is that the Rockies made on offer and fell well short of signing Cuban slugger Jose Abreu, but perhaps more interesting is the note that Carlos Gonzalez said he would be willing to move to center field next season while the Rockies are willing to listen to offers on Dexter Fowler. That's certainly something to keep an eye on when the off season kicks into high gear.

There's also a note about Matt Belisle's situation in the Renck piece. I personally prefer a a two year deal at a lower rate. He gets the security of knowing he's staying in the place where he's fond the most success, and the Rockies don't have to pay him $4.25 million after three straight seasons of decline. It's a deal that makes sense for everyone, because while the Rockies would like to have him back, I can guarantee you that they don't want to pay that much for his services.