As the A-Rod saga rolls on, the Purple Row Legal Team has everything you need to know about the latest round of litigation.

Share All sharing options for: Biogenesis Scandal: Alex Rodriguez goes on offense with lawsuit against MLB

Some of us are not well-adjusted, though, so we've been paying attention to Alex Rodriguez's appeal of his unprecedented 211-game suspension. Adding to the legal drama, A-Rod filed two lawsuits last week, and someone leaked his feuding with the Players' Association. So what the heck is going on? Here's a brief rundown for reading between innings or during a Rick Honeycutt mound conference:

What is A-Rod doing?

The Arbitration. A-Rod is appealing his 211-game suspension to a three-person arbitration panel, consistent with the Joint Drug Agreement and the Basic Agreement between the Players' Association and Major League Baseball. The appeal has gone five days so far, and is set to resume on the week of October 14. Most of the first week seems to have been devoted to A-Rod's attorneys cross-examining Anthony Bosch, the infamous former owner of the Biogenesis Clinic. 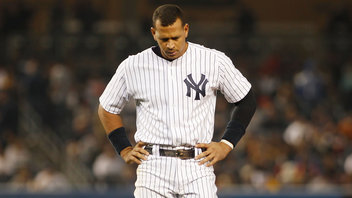 Answering the legal questions raised by the Biogenesis scandal

The Lawsuit Against MLB. Last Thursday, A-Rod sued Major League Baseball, the Office of the Commissioner of Baseball, and Bud Selig in the New York Supreme Court (which, despite its name, is the state's trial-level court, not its highest appellate court). In his suit, A-Rod alleges that MLB tortiously interfered with his contract with the Yankees and prospective endorsement deals with third parties by deliberately targeting A-Rod for suspension, violating the strictures of the Basic Agreement and the Joint Drug Agreement along the way.

If that phrase "tortious interference" sounds familiar to you, it's the same legal theory MLB used in its lawsuit against Biogenesis. Here, A-Rod is claiming that MLB violated the Basic Agreement and Joint Drug Agreement by purchasing documents, buying off Anthony Bosch, and leaking information about its investigation in an effort to ruin A-Rod's career. Through this alleged misbehavior, MLB jeopardized A-Rod's contract with the Yankees and cratered potential endorsements. A-Rod demands compensatory and punitive damages.

The Malpractice Lawsuit. A-Rod also sued the Yankees' team doctor, Chris Ahmad, and New York Presbyterian Hospital in the New York Supreme Court, alleging they committed malpractice in 2012 by misdiagnosing the extent of the hip injury he suffered during the postseason and failing to adequately inform him about his injuries. According to A-Rod, Ahmad and the hospital misread the results of his MRI, which indicated that he would need surgery. Essentially, the Yankees' physician allowed him to play hurt, and then allegedly covered up the misdiagnosis, delaying A-Rod's inevitable surgery and, by extension, delaying his return for the 2013 season.

The Fight with the Players' Union. Last week, The New York Times obtained a letter written by A-Rod's attorneys and sent to the general counsel for the MLB Players' Association, asserting that the union failed to adequately represent A-Rod during MLB's Biogenesis investigation. According to Rodriguez, the union failed to quash the numerous leaks of confidential information and protest MLB's efforts to procure incriminating documents from Biogenesis. The letter also notes that union chief Michael Weiner intimated that A-Rod was guilty of violating the Joint Drug Agreement in a radio interview shortly after MLB announced its suspension.

Why is he doing it?

Even though all of this news broke last week, plenty of attention has been devoted to A-Rod's motivation for filing these lawsuits. Opinions range from A-Rod engaging in self-destructive narcissism to cravenly creating a smokescreen to conceal his own misconduct. For my part, I agree with the view that A-Rod is acting strategically, specifically, by building a theme that will help his defense and attempting to gain some leverage in negotiating a more favorable resolution.

Litigation has plenty of procedural wrangling and minutiae, but at its heart is the art of storytelling. And any good story needs a theme. A-Rod's theme is pretty clearly set forth in his complaint against MLB and Selig, which goes well, well beyond the typical bare-boned allegations of an initial filing. According to A-Rod, he's the victim of a concerted effort to cover up the league's complicity in the Steroids Era and its desire to make an example out of someone who is no longer seen as useful to the game.

As A-Rod tells the story in his complaint, Seilg is using his authority to distract from what the complaint describes as his "disastrous tenure" as Commissioner. Selig is cast as the arch-villain, a former team owner who willingly participated in illegal collusion against players, then took the reins as Commissioner and presided over the ruinous 1994 strike. Desperate to restore fan interest in baseball after the strike, Selig and MLB looked the other way as players used steroids to drive the long ball, and as teams used the long ball to drive crowds at the ballpark and ratings on television.

And now, to complete its rewrite of the Steroids Era, MLB needs the ultimate Steroids Scapegoat.

With baseball's popularity restored, but with storm clouds gathering over PED use, Selig and MLB moved to damage control, hypocritically seeking to punish or ostracize players from whom the league had benefitted. And now, to complete its rewrite of the Steroids Era, MLB needs the ultimate Steroids Scapegoat.

Here, then, is A-Rod's theme: friendless and isolated, he represents the perfect fall guy for all of the interested parties. The league needs a target to preserve (or restore) its credibility on PEDs. The union, which itself benefited from the restoration of baseball during the Steroids Era, is prepared to sacrifice one unpopular player to save others.

And A-Rod's club has no interest in defending him, because it no longer wants him (evidenced by the Yankees' less-than-discreet desire to void his contract). Even the medical malpractice lawsuit supports A-Rod's view that the Yankees weren't interested in his health or well-being, but simply sought to use him for as long as possible by having him play hurt in the 2012 postseason.

The way A-Rod's story unfolds is that everyone -- MLB, his team, the union, and his doctors -- want to punish A-Rod for the Steroid Era and move on.

How does all of this help him?

None of this is to say you should believe all or any of A-Rod's story, or that you should find it persuasive. For starters, even accepting his position as true, it doesn't explain how MLB's conduct, rather than his own, is responsible for ruining his relationships with the Yankees and companies offering endorsement deals. Proving his narrative isn't the same as proving the elements of his claims.

Nevertheless, A-Rod is offering a coherent theme that's useful to accomplishing a key objective for his defense: widening the scope of the conflict to the courts, rather than the arbitration process. Rodriguez is challenging the legitimacy of the entire collective bargaining agreement -- and the arbitration process it creates -- by arguing that it cannot protect his rights and interests under these circumstances. No party is neutral, and all parties have interests hostile to A-Rod's.

It falls to the courts, therefore, to ensure that A-Rod receives a fair hearing presided by a neutral arbiter with no interest in the outcome. And the only way the courts can hear his case is if it refuses MLB's inevitable demand to dismiss the lawsuit, where the league will argue that A-Rod's sole recourse under the Basic Agreement and Joint Drug Agreement is the arbitration process. That process, according to A-Rod, is inherently unfair, and its judgment should be heavily scrutinized (or disregarded).

Regardless of your reaction to the merits of A-Rod's defense, as a litigation matter, he's making a strategically shrewd decision to expand the conflict and cast the legitimacy of the Basic Agreement into doubt. It allows him to hedge his bet in the event of an adverse ruling by the arbitration panel, giving him another chance to argue his case in a different (and perhaps more favorable) forum. It also gets A-Rod off the defensive by challenging the key components of MLB's collective bargaining agreement with the Players' Association. In fact, because the the tortious interference claim doesn't overlap completely with the issues in the arbitration, A-Rod's lawsuit could continue even if his suspension is upheld.

The lawsuit therefore is designed to give A-Rod some much-needed leverage in negotiating with MLB. In particular, the fact that the suit could survive an early challenge may lead MLB to pause and encourage it to work out a settlement, potentially reducing A-Rod's suspension. And as for the malpractice suit, it gives A-Rod some footing against the Yankees if they move to void his contract in the aftermath of the arbitration proceedings, allowing him to argue that poor medical care -- not PEDs -- has caused his declining production.

As expected, MLB sought to "remove" A-Rod's case from state court to federal court yesterday, hoping for a more favorable forum to hear its eventual motion to dismiss. MLB's removal motion raises some interesting jurisdictional issues that legal analysts (or, if you're David Price, "law nerds") will enjoy kicking around. Ultimately, whether the case ends up in federal or state court, MLB will move to dismiss A-Rod's suit on grounds that he cannot avoid the binding arbitration procedures set forth in the Basic Agreement.

MLB will argue that, pursuant to Article XXVII, the Basic Agreement represents the sole method for players and the league to pursue grievances against one another, and that this method can't be avoided by artfully pleading a tortious interference claim. Conversely, A-Rod will likely argue that the decision on his suspension should be stayed until his lawsuit against MLB is resolved, since the lawsuit touches on many of the same issues as the arbitration.

Neither side will likely get its wish because, in the end, the legal issues aren't identical. A-Rod is alleging in his lawsuit that MLB's conduct caused him a type of harm that's arguably outside the scope of the collective bargaining agreement, and MLB is arguing in the arbitration that A-Rod should be suspended for violating the terms of the Basic Agreement and the Joint Drug Agreement.

So while the issues touch of many of the same facts, they have different legal implications. That doesn't support either dismissal of A-Rod's lawsuit or a stay of the arbitration panel's decision on A-Rod's suspension. And if A-Rod seeks a court-issued injunction to block the suspension, he'll face an uphill battle. As a rule, courts won't enjoin another party's conduct when money damages are a sufficient remedy.

The one claim that is most likely to be tossed at an early stage is A-Rod's allegation that MLB has tortiously interfered with his contract with the Yankees. Until his suspension is upheld, the alleged misconduct by MLB hasn't compromised the validity of A-Rod's contract, because he's still entitled to play while his suspension is on appeal. At this point, there's simply no legal interference between the Yankees and A-Rod that gives rise to damages.

All things considered, there's good reason to believe that A-Rod's arbitration hearing and his lawsuits, while helping him build a coherent theme and offering him leverage against MLB and the Yankees, will proceed on independent tracks. The arbitration panel will likely issue its order sometime in December, A-Rod's tortious interference claim should survive to the point that the parties can take discovery, and the malpractice claim will continue more or less separately.

A-Rod's lawsuits may not stave off his suspension, but they give him some legal moves to use against MLB and the Yankees if the arbitration panel rejects his appeal. A-Rod is still behind in the count, but he's fouling off pitches to keep his at-bat alive.

Keep up with all of our Rockies coverage