Monday Rockpile: Is a Troy Tulowitzki trade in the cards?

The Cardinals are looking to acquire our beloved Troy Tulowitzki. If they really want him, they better be willing to pay a king's ransom.

Share All sharing options for: Monday Rockpile: Is a Troy Tulowitzki trade in the cards?

Let's get something straight. The Rockies are not looking to trade Troy Tulowitzki.

The reason there's been an uproar of activity involving Tulo's name in recent weeks and a specifically load uproar last night created from Jeff Passan's article on the topic is that the Cardinals' not-so-secret desire to find a major upgrade at shortstop has become a national story. The World Series exposed this glaring weakness in the middle of the diamond on an otherwise outstanding team, and now St. Louis has understandably made it their prime off season goal to fill it.

Why a Tulo trade won't happen 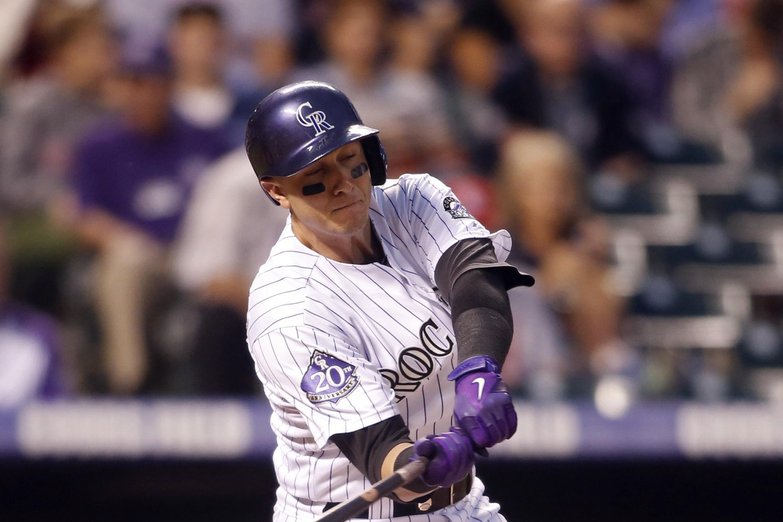 Jordan Freemyer looked at why Tulo won't be moved before the latest rumblings.

There's just one problem. There's far, far fewer guys who can play an acceptable level of defense at shortstop while simultaneously not being a black hole in the middle of the lineup than there are teams in today's MLB. Out of all the players in baseball who spent at least half their games at shortstop and hung around long enough to get more than 150 plate appearances in 2013, only 14 posted an OPS over .700. Even worse; only three posted an OPS over .800. (They were Hanley Ramirez who missed half the season and tends to play well below average defense, Johnny Peralta who missed 50 games after being connected to the Biogenesis scandal, and Tulo.)

So it should be pretty obvious why the Cardinals are targeting our beloved shortstop. He's by far the best player at the only obvious everyday position they need to fill. They know it. The Rockies know it. The entire baseball world knows it. When it comes to shortstops in today's MLB, there's Troy Tulowitzki, a time zone worth of space, and then everybody else.

All of these talks, all off these rumors, and all of the desire to move Tulo is being generated from the St. Louis side of the table. When it comes to leverage, they have none.

With that said however, baseball is a game that rewards teams with talent spread around the roster more than teams with just a couple of players who are exceptional. No matter how good any player gets, there will always be a package worth trading them for. It's just the nature of the game and why nobody should ever be truly untouchable.

The Cardinals have a whole assortment of young, highly talented players that could help the Rockies win very soon. Matt Adams, Kolten Wong, Shelby Miller, Joe Kelly, Oscar Taveras, Trevor Rosenthal, Carlos Martinez, and Michael Wacha should all be very high on the wish list, and if it were me, any discussion of a possible trade for Tulo would begin with at least four of these names - Maybe more if we're talking about the lesser of those players. If the Cardinals are not interested in forking over that kind of talent, then they can simply have a nice day.

The price here (and there is always a price), needs to be measured in astronomical units. Anything short of a king's ransom in return would just not be acceptable.

Then of course there's the other aspect of this - The Rockies fan base. Over the last decade, the five most popular Rockies have been Todd Helton, Tulo, Matt Holliday, Ubaldo Jimenez, and Carlos Gonzalez. If the Rockies traded Tulo (or Cargo for that matter), that would mean that four of the five most popular players over the last decade would have either retired or been traded in the last five years, and that's just poisonous for fan support.

Also, I can't think of an image more painful as a Rockies fan than Matt Holliday and Troy Tulowitzki together on the same team in St. Louis, and this is coming from a fan that's just watched 89, 98, and 88 loss seasons back to back to back. If the front office puts that reality on top of the last three years, it would take a long, long time before my interest level in this team recovered.

I'm not sure what else to say on this end of the topic. Watching Troy Tulowitzki play shortstop for the Rockies is literally my favorite thing in the world. I don't know exactly how I would react to losing that. Tulo is more than just an exceptional player, he's the best part of my day for six months a year.

I can understand why and how a trade here would make sense if enough high end low cost young players were added. There is a point where you will get my head to say yes on a deal - But my heart? That will always be an emphatic no.

On the free agent front, the Rockies are willing to offer Carlos Ruiz a multiple year deal.