Yesterday, I detailed the support, or lack there of, that the Rockies got from their bench in 2013. Today, I will compare the Rockies to the rest of the National League to get a good idea of how they compare and then preview what can be expected from this part of the roster in 2014.

Yesterday, I detailed the support (or lack thereof) that the Rockies got from their bench in 2013. Today, I will compare the Rockies to the rest of the National League to get a good idea of how they compare and then preview what can be expected from this part of the roster in 2014.

One of the most basic ways to compare benches in the National League is to look at pinch hitting numbers. The Rockies were very good in this category in 2013, leading the NL with a .282 pinch hit batting average. But this only tells part of the story and is skewed by 'starters' pinch hitting over .300 on the season. 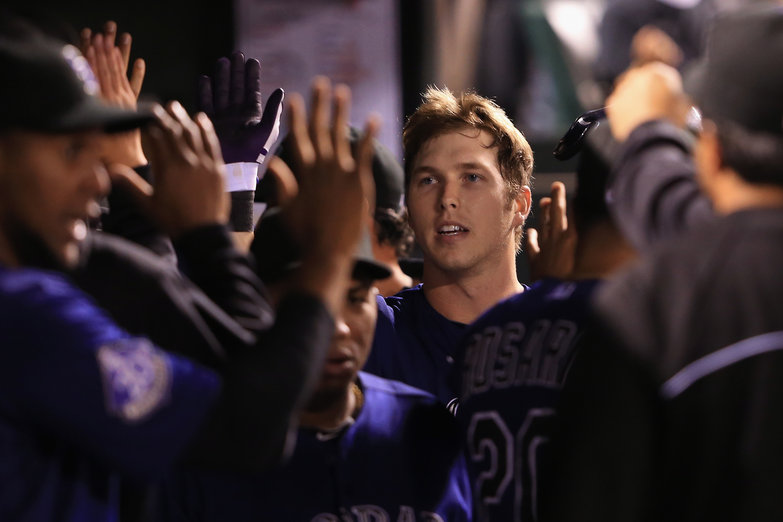 Catch up on the bench review with Part 1.

It proved difficult to find a more advanced method to directly compare team benches. For this exercise, I chose to pick the five players with the most plate appearances who were not starters plus the catcher with less plate appearances to count as the backup. For the Rockies, I did not use DJ LeMahieu, Josh Rutledge, or Charlie Blackmon as they received a lot of playing time as starters. I did use Corey Dickerson since he and Blackmon split the roles and had simliar numbers. I also used Jordan Pacheco, Jonathan Herrera, Yorvit Torrealba, Eric Young Jr, and Charlie Culberson.

For the rest of the teams in the league I tried to use my best judgement of who was a starter vs. a bench player. I then added up those players plate appearances and their rWAR for the team. Here are the numbers by team:

This is not an exact answer, but it does show who had the stronger benches in the league. The under-performing Washington Nationals were the only team lower in rWAR than the Rockies in comparison and helps explain how a team that talented could fall behind Atlanta. An overly large positive number is probably bad because it means your back-ups, even if playing well, are playing too much in the place of starters (like Mil and Chi). This does show the division leaders were some of the most positive in their benches' positive role with the bench players providing less plate appearances than the lesser teams in the division.

The Rockies had to use a lot of sub-standard bench players and they did not help the team win. A healthier season would have kept key backups like Blackmon and Rutledge as bench assets. When they are forced into regular service, it means that even less ready players are relied on to provide a spark off the bench.

Blackmon or Dickerson may be thrust into the starting lineup in 2014 with the other looking to provide a second positive season off of the bench. Herrera is likely to remain as a streaky hitter with a good glove to backup the middle infield. Rutledge and Pacheco need to improve significantly in order to be a bench asset. This team still lacks an experienced bench bat and remains an off-season need for the team. The Rockies need to have a strong bench in place with serviceable starters for both the middle infield and the outfield based on recent injury history.

Dickerson, Herrera, Pacheco (if no other catcher picked up), Rutledge, and a free agent outfielder, preferably a right hander.

I look forward to the comments suggestions on what this team needs on their bench. Each team that was successful last year had a different way of building their bench, but each of them had complimentary parts that made the team successful. What do you think we need on our bench for 2014 and how can the team meet that need?