At some point in the not too distant future, the Rockies are going to have to make a big decision regarding Dexter Fowler.

Here's the situation. The Rockies have Dexter Fowler under team control for two more seasons. He is owed $7.85 million in 2014, becomes arbitration eligible for 2015, and then hits free agency prior to the 2016 season.

This leaves the Rockies with a difficult decision involving three likely choices.

In one sense, this seems like the best option, especially if the Rockies think they are a starting pitcher away from contending in 2014. Carlos Gonzalez has already confirmed that he could play center field next season and Dexter Fowler's name is already popping up on the market.

#Mariners have #Rockies CF Dexter Fowler on their outfield wish list for trades, sources say. Fowler is available in the right deal.

With the emergence of Charlie Blackmon and Corey Dickerson in the second half of 2013 and Kyle Parker not far behind, the Rockies for the first time in a long time have some depth to play with in the outfield, making dangling a player like Dexter all the more tempting.

However, there are some pretty big red lights along this route. First off, Fowler is an ideal lead off hitter when healthy. He still hasn't figured the stolen base thing out, but he gets on base and can absolutely fly when the guys behind him get their knocks.

Over the last four seasons, 19 Rockies have amassed at least 500 plate appearances for the club, and only two have a higher on base percentage than Fowler's .367 mark - A couple of guys named Carlos Gonzalez and Troy Tulowitzki.

Along those same lines, there something Fowler does even better than Colorado's two biggest stars - Walk. Using those same 19 players who have taken at least 500 plate appearances for the Rockies over the last four seasons, only Chris Iannetta has a higher BB% with Colorado than Fowler's 12.3%.

Here's some else Fowler does well. He drives up the pitch count. Here's his pitches per plate appearance numbers for each season in his career.

Now compare that to the rest of the 2013 Rockies (minimum 150 plate appearances). 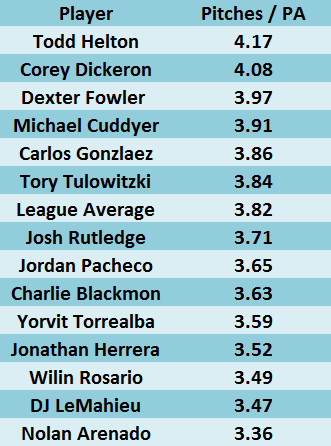 Only six players rank above league average in this category, and Cuddyer, Cargo, and Tulo only rank modestly above average. Of the Colorado's big three in this department for 2013, Helton is retiring, Dickerson is too young to be a sure bet to do it again, and Fowler might be traded. All of this while on the other side of the coin, the Rockies had five of the lowest 30 pitches per plate appearance averages in the NL. If you trade Fowler, it will be even more difficult to get into the middle relief of the opponent's bullpen.

For all of these reasons, I'd be very hesitant to trade Fowler.

2) Keep him until free agency

This isn't usually the right answer with players in this spot but with Fowler it might be a pretty good one. Unlike Matt Holliday who was traded away a year before he hit free agency, Fowler is not a superstar. Instead, he's just a very solid player when healthy.

This does a couple of things. First, it limits to haul you might pull in a trade. This doesn't mean a trade is necessarily the wrong answer, but it does mean you really only want to trade Fowler for a need that might put you over the top elsewhere, and the only place I see that happening this off season is in an attempt to plug a hole in the leaky back of the rotation after addressing some other offensive needs.

Two, Fowler's status of just being a solid player could actually make his fair value very close to that of a qualifying offer (which is $14.1 million in 2013 but should be a bit higher when Fowler gets to the verge of free agency in 2015). Over the last three seasons, Fowler has been worth 2.3, 2.5, and 2.2 fWAR and 2.6, 2.7, and 2.0 rWAR. If the Rockies elect to keep his services and he puts up two more seasons in that neighborhood, Colorado could just take the value and then slap a qualifying offer on him at the end of the 2015 season. From there, he would accept and be under contract with the club for 2016 for about $15 million or he would decline and the Rockies would get a draft pick between the first and second round out of the experience.

The biggest risk with this strategy is that Fowler either gets a major injury or sees his production tank. In those scenarios, the Rockies are likely to end up with nothing. Fortunately, both of those seem unlikely at this point.

In the summer of 2012, Dexter Fowler switched agents from the big contract negotiating Scott Boras to the more open minded Casey Close. The move indicates at least a possibility of a new contract before Fowler hits free agency.

It's still unlikely however as Fowler already has $7.85 million coming this season and just one more year of arbitration after that before free agency. In other words, the Rockies don't have that much more to give Fowler in front of that free agency date. Instead, it's going to take a large contract to keep him here long term, and with Cargo and Tulo already taking up much of the budget and a desire to also sign Jhoulys Chacin to a long term deal as well as have some payroll flexability for any maintenance that may come up over the next few seasons, a Fowler deal really limits your options.

This is not an easy decision, and it's a call that might even depend on what happens in the first half of the off season (are the Rockies close enough to contention to swap Fowler for a starting pitcher). If it's too close to call, the Rockies can also wait until next off season as the option to trade or resign him will still be open, but by Spring Training 2015, the Rockies are going to have to choose one of these paths and calculate how it fits into the rest of their overall plan.

No matter what option they choose, it's going to involve a delicate balance of high risk and high reward.

Reports of a mystery team offering Carlos Ruiz a two year $20 million contract and pushing the Rockies out of the bidding proved to be inaccurate, well, not the pushing the Rockies out of the bidding part. But, uh, about that $20 million? Today, the Phillies resigned their longtime backstop to a three year $26 million deal. With all of the old players they are going to have on that team now, maybe we should offer them our dinosaur mascot.

Baseball is getting close to finalizing a plan that will have expanded instant replay in place for the 2014 season. On one hand - "Welcome the the 21 century!" On the other, I really hope there's not any significant unforeseen negative consequences.

According to Mike Axisa of CBS sports, the Rockies considered trading Matt Holliday to New York for Robinson Cano instead of to Oakland for Carlos Gonzalez five years ago.