The 2013 Colroado rotation was exactly how it looked. It had three very good pitchers at the top, one guy who was serviceable as a back end starter, and then a whole bunch nothing.

Sometimes when you're reviewing a particular player or a part of the team there's a new and different angle you can take to shed light on an issue that's already been heavily discussed, but in the case of the Rockies rotation, what you think you see is pretty much what you get.

Jhoulys Chacin, Jorge De La Rosa, and Tyler Chatwood all had excellent seasons, Juan Nicasio was a serviceable number five starter who was forced into being a number four (and sometimes number three) due to lack of depth, and everybody else was - Oh, how shall I put this kindly? - A complete and total disaster.

Earthshaking news right? There's really no other place you can go with this though. The reason why we've talked so much about this team's lack of rotation depth and a need for another starter is because the issue is so glaring. Much like the collection of everyday players, the Rockies have a strong core at the front of their rotation, and absolutely no supporting cast. Here's the breakdown of the 162 games started this season. 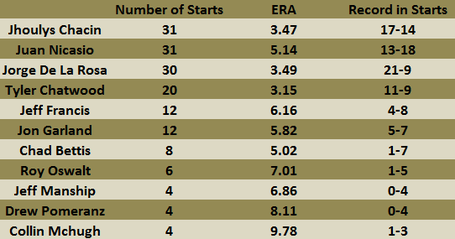 It's very difficult to assign numbers to this rotation because it was in flux all season long, but if we loosely define Chacin as our #1, De La Rosa as our #2, Chatwood as our #3, Nicasio as our #4 who sometimes became our #3 because of injuries, Francis as our emergency stopgap when one (or more) of the other guys couldn't go, and everybody as failed #5 starters, we can get a pretty good handle on how horrible the bottom of the rotation performed. From May 10th onward, our failed #5 starters of Jon Garland, Chad Bettis, Roy Oswalt, Drew Pomeranz, Jeff Manship, and Collin McHugh started 32 games, and in those 32 games, the Rockies went 4-28.

Full disclosure, I played with those numbers a little to get that result. I chopped off the good Jon Garland games in April, I moved Francis to the stopgap role, and it also just naturally worked out that the Rockies didn't score as many runs as they usually do in these games, but 4-28 is 4-28 even with some cherry picking. Most of the time in baseball you're going to win a handful of games in any stretch almost by accident, so to come up with a record this poor can really only happen if you have one of if not the worst bottom of the rotation in the game.

I think the news on the Chacin, De La Rosa, and Chatwood from is actually pretty good for a couple of reasons. First of all, these guys only started 81 games in 2013 when a healthy top three in your rotation from opening days has the potential to start somewhere between 95 and 100 games. So right from the get go, there's already a little bit of an injury safety net built in there for lost production. Now obviously if you lose one of these guys for the year in May you're sending out an SOS, but if they avoid total injury catastrophe, the Rockies should be Okay on this front.

Second, I think the regression of the actual performance of these three will be minor. Both Chacin and De La Rosa have proven they can pitch well at altitude for multiple seasons now and know how to take advantage of the team's strengths on defense. Both players are due for a bump in the home runs rates surrendered, but I don't see any sort of crashing and burning being likely here.

Chatwood is a little more difficult to pin down, but his number may actually be even better than they look at first glance. Chatwood started 20 games last season but had to leave two of them early because of injury. If you throw those two games out (where his ability to pitch effective was clearly limited), his ERA drops from 3.15 to 2.51. What I'm getting at here is that if Chatwood is going to regress next season (and I do think he's going to regress), his starting point may actually be better than it first looks on paper, leading to a final line in 2014 that ends up closer to his 2013 ERA number.

When all is said and done, I think the Rockies can again be 15 or more games over .500 in the games started by Chacin, De La Rosa and Chatwood in 2014 largely because there's a good chance that there's going to be more of them. From there, it's a matter of acquiring better starting pitching to support these three. Maybe some of this production will come from within with Drew Pomeranz putting it together and just learning how to be a middle of the road pitcher (never mind reach his potential), but it's pretty clear that at least one of the upgrades is going to have to come via trade or free agent signing.

Even if it's just a decent arm, it's still a great acquisition for this club, because any upgrade at all brought in to support the top three guys is going to immediately soak up the most toxic outings we saw in 2013, and just 30 extra starts from a guy who can help lead the team to a .500 record when he's on the mound likely places the 2014 Rockies north of 80 wins.