It's not just about what Carlos Ruiz could add to the Rockies, it's also about the negative things he could help the club remove.

Share All sharing options for: Monday Rockpile: Signing Carlos Ruiz would help more than you think

The potential signing is said to improve the Rockies defense behind the plate, as Ruiz is an experienced game caller, a strong pitch framer, and a guy who works well with pitchers. It also tells us that while Wilin Rosario made tremendous strides behind the plate in 2013, the Rockies think they can get a little bit more out of their pitching staff with somebody else taking a large chunk of starts while sententiously mentioning Rosario.

However, I can also envision a scenario where Ruiz helps the offense just as much as the defense. First off, Ruiz is a solid offense player himself, especially for a catcher. Over the last three seasons combined, he's posted a .293 / .365 / .432 line. Last year was a disappointment in this department, but it's very likely that injuries helped derail his season.

Ruiz spent much of August and September of 2012 on the shelf with plantar fasciitis in his left foot and then missed time in the first half of the 2013 season with hamstring problems. It should also be noted that while Ruiz's OPS was an unimpressive .688 on the season, it was .788 in August and September as he distanced himself from these injuries.

Ruiz will turn 35 in January, so his best offensive days are likely behind him, but it's far from unreasonable to expect a league average bat in 2014 - Which brings me to why he could really help the Rockies offense even while pushing Wilin Rosario's bat off catcher for at least half of his plate appearances.

Take a look at the Rockies Drag Factor chart for 2013 below; I went over my feelings on this in the comments section from Friday and have mentioned the formula before, but just in case you're unfamiliar with the metric I created to illustrate how lousy the Rockies were at preventing terrible hitters from taking a large number of plate appearances, here's a quick explanation.

For those who don't like all that math, we're just looking for players who have very poor offensive stats and a very high number of plate appearances. The more extreme the combination of each of these two factors are, the higher a player's Drag Factor score is going to be. Here's where the Rockies ended up for the 2013 season, and yes, their score was by far the highest of any team in the division. 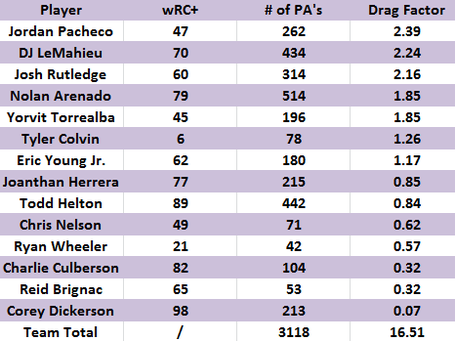 Notice the top five players on the list. They were responsible for 64% of the team's total Drag Factor score, or to put it another way, they had a higher Drag Factor score by themselves than the team total of any of the other four clubs in the NL West. This is a major, major reason why the Rockies finished in the cellar.

Now three of those top five are going to be on the roster again in 2014, but I'm actually not upset about it. Nolan Arenado has the tools and the work ethic to completely remove himself from this list by becoming at least a league average hitter next season. (Despite winning a gold glove this year, Arenado was originally drafted by the Rockies for his bat.)

The second base situation is a bit more complected but it also has the potential to improve itself. Josh Rutledge is coming off a disappointing season and is a good rebound candidate, but even if he doesn't bounce back, the Rockies have an excellent glove in DJ LeMahieu at a middle infield position, and like Arenado this season, a high Drag Factor score is considerably easier to accept when you're helping the team on the other side of the ball.

Now, if the Rockies consider themselves close to contending for a playoff spot next season, the other two players at the top of this list shouldn't be within a 50 mile radius of Coors Field next season. That's where Ruiz comes in. If playing time is distributed properly, there's a scenario where a Ruiz signing can purge both Pacheco and Torrealba from the roster permanently, and that's news that should have every Rockies fan extremely excited.

On paper it would work out like this. Ruiz starts 90 to 100 games behind the dish with Rosario taking the remaining 62 to 72. Rosario would then also split time at first base with Michael Cuddyer with Cuddyer handling about the same ratio of games as Ruiz. However, Cuddyer could also start an additional 30 to 40 games in right field depending on circumstance, and part of that circumstance absolutely contains potential injuries. With moving parts, you're protected if any one of these players has to serve some time on the DL.

This could also work out especially well if the Rockies go after someone like Shin-Soo Choo for the big bat the front office said they were looking for. Choo struggles big time against lefties, so on some days when the Rockies are facing a tough left handed starter, Weiss could elect to start Ruiz behind the plate, Rosario at first, and Cuddyer in right field and then have the lefty as a big bat waiting to come off the bench in a tight game late. The ability to control things like that makes a big difference over the course of 162 games. Remember how many games the Rockies won in 2009 because they had Seth Smith waiting on the bench to come in and disrupt things late in games? Depth is key here.

There's a strong argument to be made that Michael Cuddyer and Wilin Rosario cost the Rockies more runs defensively than any other players in 2013. That doesn't necessarily mean they were the worst defenders, but it does mean that they were below average with a glove, and that combined with the amount of playing time they received because of their valuable bats ended up costing the team more runs than what would be considered desirable.

If the Rockies can land Carlos Ruiz and one big outfield bat however, they could reshuffle the deck on both sides of the ball and take a big step towards contending. It doesn't seem like a major rumor on the surface, but don't underestimate the impact a Ruiz signing could bring to this roster through flexability.

Bill Geivett was on MLB Network radio this weekend and he talked briefly about Tulo, Cargo, health, and some of the young guys.

Patrick Saunders has a list of interesting stats surrounding the 2013 Rockies season, some of which we've discussed at length here at Purple Row.

There's a couple of interesting links about home runs today. First, a spray chart of the home runs hit in each ball park, and second, a link that expands on some of the more interesting home run numbers all season.

Meanwhile, the Alex Rodriguez saga continues. (This article is worth your time)