The Colorado Rockies have an answer to the question, "Who will be the first man not named Todd Helton to play first base for us?" Welcome to Colorado, Justin Morneau.

The stove is hot and the Rockies are a cookin' somethin' up, how easily it goes down remains to be seen. In a move that many had been anticipating and some had been fearing all week, the Colorado Rockies have signed Justin Morneau to a 2 year, $13 million contract with a mutual option for a third year.

#rockies have agreed to terms with morneau, 2 years for about $13M. @TroyRenck 1st reported close.

The morneau deal will have a mutual option for third year. The guaranteed money is slightly under $13 million. #rockies

I do not count myself among those in the camp fearing a Morneau signing, but I am firmly in the "this-is-not-a-big-enough-deal-to-justify-the-Dexter-Fowler-move" camp.

If acquiring the former Twins all-star is a spicy appetizer to a main course yet to grace the table at which Rockies fans sit, it may prove to be a tasty appetizer indeed. Morneau may be past his best years, but there is substantial evidence to suggest he isn't done being a productive baseball player. 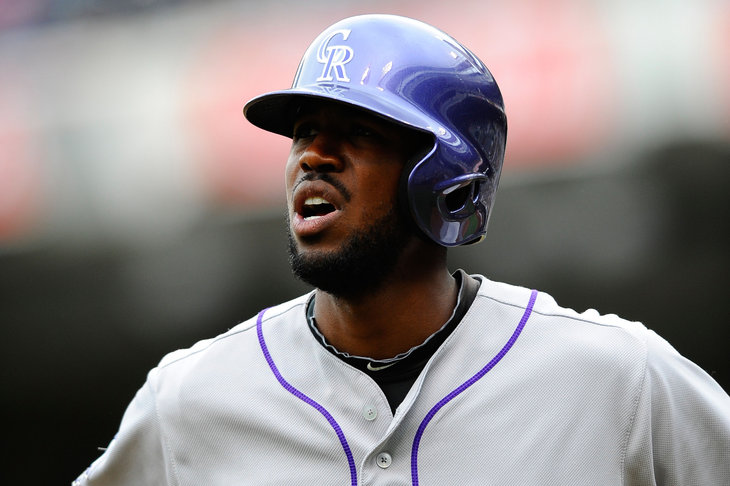 Well, the Rockies will receive Brandon Barnes and Jordan Lyles from the Astros.

In 2012, Morneau posted a .333 wOBA and a 108 wRC+ which is exactly what Steamer expects him to produce in 2014. Not crazy good numbers but reasonable to expect and marked improvements over what the Rockies had been getting out of the first base position. (We love you forever Todd.)

Even if he never regains his 4.9 fWAR form from 2010 and stays in the 0.8 range he was last year, he still represents an upgrade offensively at a corner infield spot and his numbers could gain some altitude in his new environment, if you catch my not-at-all-subtle drift.

His approximately 18 home run average per his last three healthy seasons could land closer to 25 at Coors Field and yesÂ hitting in a lineup with Carlos Gonzalez and Troy Tulowitzki could help him maximize his potential offensively and maybe even have a Michael Cuddyer like renaissance. He is a similarly talented player who simply isn't too old to be done.

Health is of course a concern (when isn't it) but a healthy Morneau should not be scoffed at as an addition to this club.

It simply has to be noted that this move confines Cuddyer to right field and there are conflicting reports on how well Morneau plays first base, meaning that unless the Rockies plan to platoon Morneau and acquire another outfielder, they have limited their ability to improve defensively.

Being below average defensively at RF, 1B, C and maybe the other LF spot depending on who replaces Dexter Fowler (reports confirm Carlos Gonzalez to man CF) means that these guys absolutely have to hit in order to compete.

The Rockies could give Morneau a few months in 2014 to see if he can figure things out against lefties while also giving Wilin Rosario a chance to get better defensively behind the plate. If one or both of those don't pan out, they could acquire/promote a catcher and platoon the two.

Or the Rox could be planning on platooning Morneau with Cuddyer from the start and signing a big-time outfielder.

If it turns out, however, that the Colorado Rockies expect Justin Morneau to be the feast de resistance for fans, they have almost certainly miscalculated and served their dinner party Guatemalan Peasant Soup. "It is an entree! It's like a stew!!"

Serving something bold and tasty, like the perfectly aged and highly concentrated flavor of a Shin-Soo Choo would be as fulfilling as it is unlikely.

A the top-of-the-line special like Masahiro Tanaka would surprise everyone, pretty much in the whole world, as it would calm them down about the Dexter Fowler deal and put to rest the "Rockies are cheap" narrative. So that probably won't happen.

Even something hearty like Nelson Cruz or better yet Yoenis Cespedes who would need to be acquired via trade and not more signing money, would make for a much more satisfying main-course. And that's the one I hope the Rockies are cookin' up on that hot stove back there.

Hope may be a four letter word but so are a lot of my other favorite ones.

If this is misplaced, the Rockies better haveÂ hit the lottery with Morneau and/orÂ Jordan Lyles as comeback/breakout guys, otherwise it's going to be a long 2014 for everyone wearing purple.