One of the game's greatest players, Oliver "The Ghost" Marcelle, came to rest in Denver.

Share All sharing options for: Remembering Oliver 'The Ghost' Marcelle

The incomparable Baseball Reference lists 45 big-league ballplayers who have been buried in Colorado. There is a 46th, however, and his name was Oliver Marcelle.

Marcelle starred in the Negro Leagues, well before Major League Baseball ended its ban on African-American players. Born in the marshes of Thibodaux, Louisiana in 1897, Marcelle played semipro baseball in New Orleans as a teenager, then debuted for the Brooklyn Royal Giants in 1919. Marcelle joined the Royal Giants in the final years of their reign as an elite team, before the club was sold to Nat Strong and began its unfortunate decline.

His talents led many ... to conclude that he was the greatest third baseman

Marcelle reached the peak of his talent – and his fame – in the 1920s, playing for the Giants clubs in Atlantic City and New York. A fearless third baseman, Marcelle played ten feet closer to home plate than his peers, but lost none of his tremendous range, earning him the moniker of "Ghost."

He was a force at the plate, as well. Regrettably, offensive records from the Negro Leagues are incomplete. The available records indicate 150 or more plate appearances by Marcelle in only five of his 14 professional seasons. In those five years, however, Marcelle hit above or just under .300 in four of them. His talents led many, including Buck O’Neil, to conclude that he was the greatest third baseman in the history of the Negro Leagues, if not in all of baseball.

Like many ballplayers of his day, Marcelle’s career, and life, ended sadly. His temper was infamous, leading him to brawl with opposing players, umpires, even teammates. Marcelle’s short fuse, and his drinking, led to a 1929 fight in Cuba, during which a piece of his nose was bitten off. Fans were merciless about Marcelle’s resulting disfigurement, and the abuse he took led him to retire shortly thereafter. After an aborted player-coaching comeback in Miami, Marcelle settled in Denver, where he painted houses.

Perhaps Marcelle’s finest contribution came during his retirement here in Denver. Throughout the 1920s, 30s and 40s, The Denver Post hosted a national tournament of terrific semiprofessional teams. The event was an all-white affair until 1934, when, according to the local story, Denver’s new resident, Oliver Marcelle, convinced the Post to invite the Kansas City Monarchs to compete in the 1934 tournament. The Monarchs reached the finals that year, and after 1934 the tournament remained integrated.

Obscure, broke and alone, Marcelle died in 1949. He was buried in an unmarked pauper’s grave at Riverside Cemetery, just north of downtown Denver. Marcelle laid unremembered for nearly four decades until, in 1991, baseball historian Jay Sanford and Fairmount and Riverside Cemeteries dedicated a tombstone in Block 29 of Riverside.

Riverside Cemetery is on Brighton Boulevard, just north of Interstate 70. Coming from the south, one drives past a salvage yard, then crosses on the west side of train tracks that lead to the large refineries in the northern skyline. From his tombstone, Marcelle could hit an easy double to a local distribution warehouse.

The marker, seated in the ground, looked like this on Saturday: 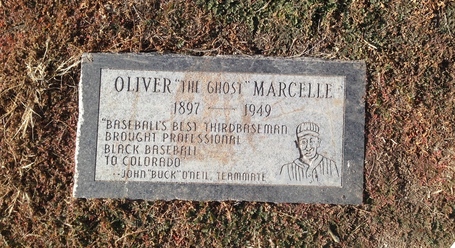 Here, in clay ground warmed on a sunny December afternoon, just before the evening snow arrived, rests one of the greatest third basemen of all time.