Happiness can't be bought, but it can be rented. And the Dodgers have the assets to be very happy in 2013.

I liked Frank McCourt. In his final year as chairman and owner of the Dodgers, he was overleveraged and overmatched, which financially hamstrung the franchise despite its location in a giant media market. He was the perfect Dodgers owner... for Rockies fans.

All good things must end, and for McCourt (and division rivals), that happened last May, when the club was sold to a new ownership group. Amid the transition, Los Angeles rode strong starting pitching to a second-place finish in the NL West (86-76), unable to close the deal in the second half despite a mega waiver-wire move that imported Adrian Gonzalez, Carl Crawford and Josh Beckett from the Red Sox. Crawford would not play for LA in 2012, Beckett fared well in Dodger blue (2.93 ERA, 3.82 FIP), but Gonzalez and the previously-acquired Hanley Ramirez weren't enough to help the ailing Matt Kemp.

The new Dodgers ownership group made clear that it intended to spend big in the off-season, buoyed by a new television deal with Time Warner worth $7 to 8 billion over 25 years. And have they ever. Here are the key free-agent signings from the past off-season:

These pickups, along with taking on the contracts of Ramirez, Gonzalez, Beckett and Crawford, as well as extensions of Matt Kemp and Andre Ethier over the past two years ($160 million and $95 million, respectively), now give the Dodgers the largest payroll in Major League Baseball, sitting at $220 million. To appreciate how big a game-changer that is in the NL West, consider the trends of payrolls over the past 5 years: 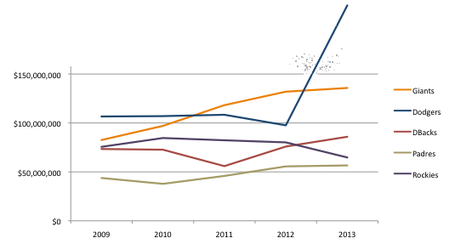 Yikes.
Last August's deal with Boston remains the Dodgers' biggest move over the past year. But the dividends of that deal remain elusive, since Crawford was hurt, and Gonzalez (like Ramirez) didn't quite meet expectations. Given these uncertainties on offense, it was interesting that the Dodgers spent a goodly sum this off-season on two pitchers: Zack Grenike (now the highest paid player in baseball on an annualized basis) and 25-year-old South Korean phenom Hyun-jin Ryu. This was all the more interesting since last year's Dodgers club had the 4th lowest ERA in baseball (5th best ERA+), complementing their 5th best FIP. LA's starters deserve much of the credit, posting the league's 3rd lowest ERA (3.41) and 4th lowest FIP (3.64).

So why did the Dodgers acquire two big starting arms-Grenike and Ryu-when they have other pressing needs, such as third base? At first, I thought these were "best player available" signings. They had the money, Greinke and Ryu were on the market, and regardless of the strength of last year's rotation, these were two guys likely to improve the staff. But looking at some of the other numbers from last year helped to clarify why the Dodgers would spend big on starting pitching: For example, xFIP measures pitcher performance after normalizing the home-run rate. The xFIP for Dodgers starters last year was 4.00, tied with the Pirates for 12th in the league. Los Angeles' starters had a 4.01 SIERA, which, like xFIP, seeks to take some luck out of the equation and thereby better predict future performance. Measured by SIERA, the 2012 Dodgers' starters were much more pedestrian than their ERA and FIP would suggest: 13th in baseball, and 3rd in the NL West. Factor in the starters' relatively low BABIP, and relatively high left-on-base percentage, and you can see why LA's front office didn't expect another standout year from its pitching staff, particularly its starters, without some key additions. Less clear is why the Dodgers felt the need to pay big money on a closer in Brandon League, whose $27 million deal looks spendy to Dave Cameron in light of what turned out to be a relatively soft market for relievers in the past off-season. But these aren't Frank McCourt's Dodgers, so a little overpaying won't hurt.

As for position players, with the exception of trading for utilityman Skip Schumacher, the Dodgers have been quiet this offseason, content to open camp without significant changes to their lineup. That makes good sense, since most of the Dodgers' makeover came during last season, and they have plenty of pitching surplus to trade depending on specific needs, again, like third base.

Having money and surplus starters is one thing, but using those assets wisely is another. Without another major move, did the Dodgers acquire the right pieces to end three decades of pennant disappointment in LA? Well, to win the NL, they'll need to reach the postseason, and to get to the postseason, they'll likely need 90 wins, judging from division winners and wild cards in the last few years.

The Dodgers almost certainly have the wins they need to add to last year's 86-76 team. The pitching will be very good, from both the starters and the backend of the bullpen, and it's reasonable to count on a bounceback from Adrian Gonazlez, who projects to have an OPS above .870, although his power curiously declined last year. Carl Crawford is a bit of a mystery after an inconsistent tenure in Boston and, as Buster Olney explains, Hanley Ramirez is facing a make-or-break season. So money hasn't answered all of the Dodgers' questions. In the end, though, the Dodgers' lineup (with 2012 slash line and Bill James' 2013 projections), will be formidable, though not overwhelming, if it meets its potential:

Add strong pitching to the mix, and 90+ wins is well within reach. PECOTA sets the Dodgers at 93 wins this year. The early indicators suggest Los Angeles is the favorite to win the West, and Magic Johnson is setting his expectations even higher.

Bryan Kilpatrick explained yesterday how the Giants are relatively content to stick with last year's plan for returning to the postseason. Tomorrow, Andrew T. Fisher will cover the Diamondbacks, a team that's had a curious offseason and (at least in my opinion) is a sleeper to contend this year. But the stars are shining bright in Los Angeles, and this offseason helped to align them for a strong run at October glory.
Come back, Frank.
(Postscript: Eric Stephen has a terrific breakdown of the Dodgers' offseason--and what it portends for 2013--at True Blue LA. Check it out here.)