The Rockies added two more former 20th century Rockies to their coaching staff, but this time, they managed to add two coaches that were never teammates in Denver.

The Rockies continue to reconnect with their past by hiring all sorts of notable names from Rockies squads in the mid-90's. Until recently, we could point to the inaugural Coors Field squad of 1995, which featured SS/MGR Walt Weiss, LF/HC Dante Bichette, 3B/Special Assistant Vinny Castilla, and reserve OF/baserunning coordinator Trenidad Hubbard.

Yesterday, the Rockies expanded their horizons. Sure, they hired 1995 2B Eric Young as a guest instructor during Spring Training, but they also hired Pedro Astacio for the same position. While Astacio is a top five starting pitcher in franchise history, he was never teammates with all of those coaches. Well, Eric Young anyway. Astacio was acquired from the Dodgers in a trade for Eric Young straight up in August of 1997.

So now we have coaches from different Rockies' eras. 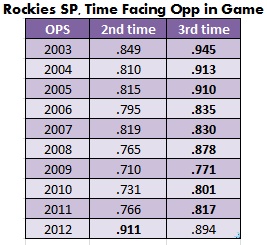 None of these coaches will have a significant hand in solving the pitching puzzle a mile above sea level. That is left to Mark Wiley, Bo LcLaughlin, and Jim Wright. One plan currently hatched to get around the troubles of Coors Field is carrying an extra reliever. Manager Walt Weiss notes the reasoning stemming from chronically higher OPS by Rockies pitchers the third time through a lineup. To his credit, he is very correct.

It is perhaps amusing that this comes on the heels of the first year in over a decade in which Rockies' pitchers actually pitched better the third time through the lineup than the second. However, the gap is small, Project 5183 muddled the fruit bowl comparison, and these numbers include road games.

Another attempt to curb pitching woes is to preach keeping the ball down. While this sounds like a good, sound axiom, elevating the eye level is also important to commanding at-bats, and the reality remains that some hitters hit just fine low in the strike zone. As Chris Chrisman will illustrate later, it is hardly the high pitches alone that get hit out of the ballpark.

One particular puzzle the Rockies are trying to solve is Drew Pomeranz, and the McLaughlin method is to teach him to figure out his problems himself; in other words teaching him to be capable of self-correction.

Jhoulys Chacin may pitch for Venezuela in the World Baseball Classic. He may impact the 2013 season more than any Rockies' player, so the kneejerk reaction is horror. But it may be advantageous for Chacin to give a true trial of his pitching prior to the season. Should he break down from injury or ineffectiveness, it would be less likely to derail a Rockies April again.

Perhaps more than anything the Rockies can do, the best route to finding consistency in pitching at sea level is to keep their good pitchers healthy. As Russell Carleton wrote yesterday in a research piece:

"Once a pitcher is damaged, he's damaged goods. ...Injury history (is) still the top predictor (of future injury)."

Rockies Mailbag: This year's team looking much like last year's team - The Denver Post - Patrick Saunders answers questions on Rosario's defense, whether the Rockies are contenders, if the Rockies will sign Kyle Lohse (they won't), and if Tulowitzki is a PED abuser because he is friendly with Ryan Braun.

Prospect Arenado feeling more confident this spring | Rockies.com: News - He is saying exactly what we would expect him to, that he's not putting pressure on himself to make the team out of Spring Training. Incidentally, that's what he said last year, but I'm more inclined to believe it this time.

Renck: Rockies manager Walt Weiss has comrade in White Sox's Robin Ventura - The Denver Post - The comparison is an easy one.

And finally, this is apparently happening this year: 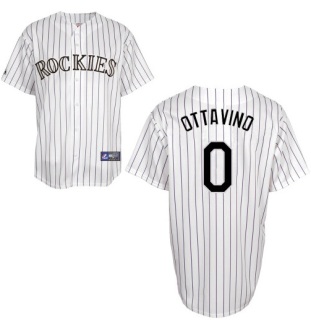