Will pitching low in the zone really benefit the Rockies?

The Rockies believe working low in the strike zone will improve their fortunes. At least one bit of evidence from last year, however, suggests otherwise.

Share All sharing options for: Will pitching low in the zone really benefit the Rockies?

Spring training brings promise, hope and, for the Rockies and their fans, relief. With the team preparing for the new season, the annus horribilis of 2012 Rockies baseball can be buried and forgotten.

It shouldn't be. Sifting through last year's ruins isn't an exercise in masochism. It's an opportunity to learn what went wrong, with the goal of discovering what works well. For this reason, the Rockies should be commended for refusing to treat 2012 as an aberration but, instead, as fodder for deriving hard lessons. Andrew T. Fisher covered these lessons in today's Rockpile.

One such lesson, reported last week by Troy Renck, was the new manager's mantra that Rockies pitchers must induce more groundballs. This means, apparently, working lower in the strike zone. Thomas Harding reported yesterday evening that the Rockies have employed more demanding exercises to emphasize the need to work low in the zone. The Rockies believe that last year's terror was, at least in part, "a reflection of pitches left up in the strike zone."

While it's laudable for the Rockies to seek answers from last year's debacle, are they reaching the right conclusions? Is it really true, for example, that the 2012 Rockies failed to execute the organizational philosophy of attacking low in the zone, and left pitches up to get hammered? Or is that philosophy, if not flawed, then at least incomplete? To test this, we have to return to the dark days of 2012, not because it's pleasant, but because learning the wrong lessons from last year will leave the Rockies no better off than they were before.

One way to test whether pitches left up in the zone hurt the Rockies last year is to look at the pitch locations of home runs, which were, in the main, the hardest hits the pitchers surrendered. To do that, we need to review all 198 home runs surrendered by Rockies pitchers in 2012.

Thanks to the incomparable Pitch F/X data available from BrooksBaseball.com, we can see the locations of the 198 pitches thrown by Rockies pitchers that resulted in home runs last year. Actually we can see 197 - for some reason, Carlos Ruiz's home run off Jeremy Guthrie on July 14 wasn't available from the data, so I've had to estimate its location based on video. A screen cap of the home run is here, and I've identified this "missing" pitch in red below. The other 197 pitchers are from Brooks Baseball, which I assembled game by game into one chart using a "non-normalized" strike zone (meaning the zone isn't modified based on the hitter's height): 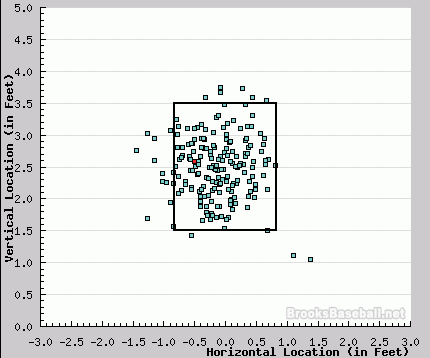 I had three initial reactions to the chart:

First, most of the home runs against Rockies pitchers came inside the strike zone. If home runs result from missed spots, or at least hittable pitches, the Rockies missed badly over the plate.

Second, while there's certainly support for the notion that the Rockies left pitches up in the zone, there are an awful lot of pitches thrown in the lower half of the zone that were hammered for home runs. If that's the case, it's much less certain that keeping pitches down in the zone will curtail home runs.

Third, judging from my eyes, it looks like the bigger problem isn't pitches that were elevated in the zone but, rather, pitches left over the middle third of the plate. The 2012 Rockies had a horizontal problem, not a vertical one. And while the smashability of a center cut pitch doesn't come as any surprise, it belies the notion that the upper part of the zone is the Rockies' problem area. The Rockies surrendered many of their home runs on pitches over the heart of the plate. In that sense, their problem area is no different than anyone else's.

But these are reactions based strictly on the eye test. Do they bear scrutiny? Here are the pitches by vertical location, quantified regardless of location inside or outside the strike zone (I had to make some judgment calls, so yours may be different from mine): 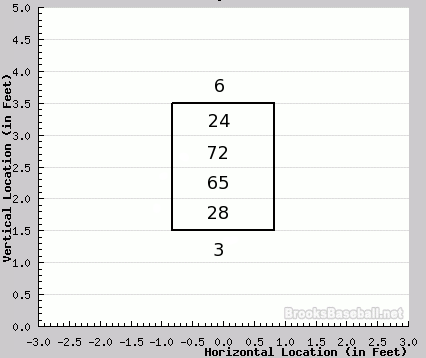 Again, for purposes of this exercise, ignore the strike zone, since this chart only shows the vertical locations of the pitches. Looking at this breakdown, 102 of the 198 home runs came on pitches that were above the strike zone's midpoint of 2.5 feet, thereby supporting the notion that elevating pitches courted disaster. That's 51.5%, so a majority, but only a bare one.

Getting hit hard in the middle of the plate is even more apparent when we look at the horizontal location of these pitches. 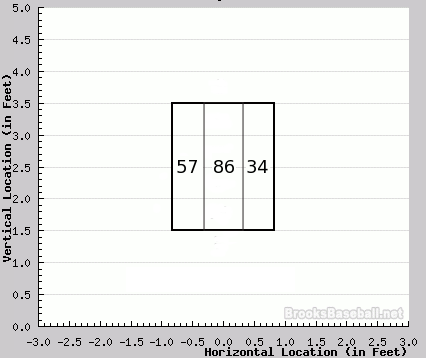 Of the 177 pitches inside the strike zone that were hit for home runs, a clear plurality (86, or 43%) were in the middle third of the strike zone. Throwing right over the plate, not unexpectedly, resulted in the long ball. And when we break out the strike zone into quarter-sections, we can isolate an even bigger problem: 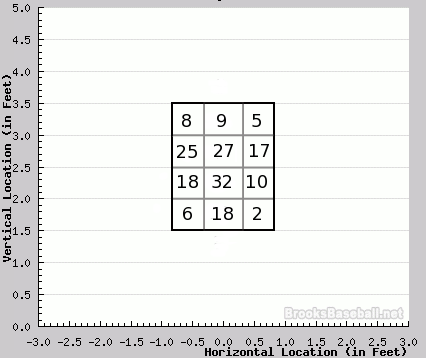 Finally, we don't need to analyze (or perhaps overanalyze) this pitch location data to see the thrust of the problem. Just looking at the heart of the zone (6 inches off the corners and the top and bottom halves of the zone) reveals the issue: 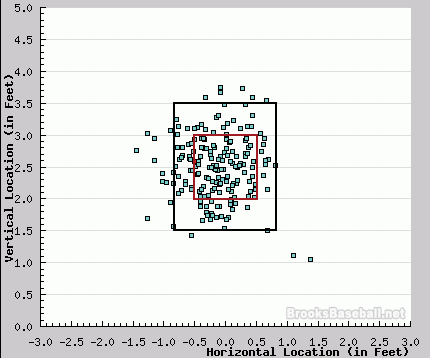 To be sure, there are some significant limits to the data. For starters, this chart doesn't show the handedness of the hitters, which makes a difference on pitches outside the middle-third of the plate. Similarly, it's not adjusted for height, so the home runs hit by Michael Morse (6' 5") and Miguel Montero (5' 11") are shown in the same static strike zone. We also don't know from this chart the percentage of pitches thrown high, middle or low that resulted in big hits, including home runs. It could be that, as a percentage of pitches thrown, higher pitches generally were hit harder and more frequently than lower pitches. In that vein, the chart also doesn't show the hard hits that came on balls that stayed in the park, which conceivably could change these conclusions.

Most importantly to me, the chart doesn't tell why Rockies pitchers came into the middle part of the strike zone last year. Was it the result of falling behind in the count and needing a strike? Possibly, but unlikely, since a majority of the home runs surrendered by Rockies pitchers (121) came three or less pitches into the at bat. Was it the result of letting a preceding batter on base, leading the pitcher to press for a groundball to erase the runner, or throw an early strike after a walk? We'd need to know more to make a better judgment.

But the information certainly offers one data point for the effect of elevating pitches, and that data point calls into question whether avoiding elevation is a strategy for success. Elevating pitches was at worst a wash compared to working low in the zone, and was at best marginally more effective. At a minimum, evidence of harm when working high is inconclusive. This itself is significant, since deliberately forfeiting the top half or top quarter of the strike zone limits the area where pitchers can work effectively, for example, by changing the batter's eye level. It also clues in an opposing hitter on where to look for pitches. If the Rockies are fearful of working the top of the strike zone, opposing hitters will know to focus low. There's sacrifice, and risk, to this approach.

Learning painful lessons from 2012 is a good thing. Learning the wrong lessons is a bad one. It's often said that generals always fight the previous war. It'd be unfortunate if the Rockies cede fruitful ground in the strike zone based on a misunderstanding of last year's campaign.