Baseball America released it's list of MLB's Top 100 prospects this week and several Rockies were on it. This is a good sign for an organization that believes it must build from within to succeed, but does this strategy actually lead to more wins and playoff appearances?

This week Baseball America released a list of MLB's top 100 prospects and in it the following Rockies made the cut: Nolan Arenado, David Dahl and Trevor Story. Making this list is considered an honor in baseball circles, for the player and the organization. Especially for a club like the Rockies which prides itself on a build-from-within philosophy. Knowing this is a front office strategy, I wanted to take a closer look at the results to see if it pays off for the franchise.

There are different ways to grade an organization: the number of wins it accumulates is the most popular, top prospects on the farm is another. Lists like BA's Top 100 lends insight into the production of the Rockies farm and let's us evaluate its draft and develop capabilities through an outsiders perspective. The question for me then, is how does the number of top prospects influence the organization, whether positively or negatively and does the number of top prospects influence a team's wins? My other interest in the Top 100 list was to use it as a benchmarking tool and compare it to other team's to see if the Rockies are doing better than their main competition when it comes to developing from within.

The methodology for my approach started with a list of BA's top 100 dating from 1993 when the Rockies first came into being. Fortunately I discovered a document made by Jeff Zimmerman of Royals Review and posted at Beyond the Boxscore which covered BA's Top 100 from 1990-2010. After updating the missing data I had a list to compare.

Looking at the graph below, it's easy to tell the Rockies have been very consistent in turning out top level prospects. This was especially true in 1997 and 2007 when the farm was headlined by Todd Helton and then Troy Tulowitzki. Those two years produced a combined 13 prospects that made the cut for BA's list. 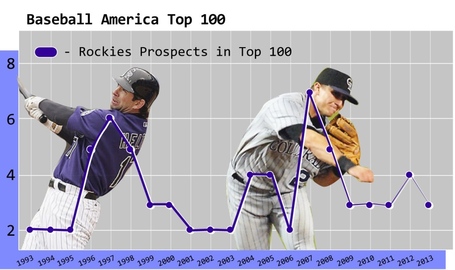 Overlapping the team's wins in the graph below shows a corresponding trend with increased prospects and increased wins. This could be attributed to the prospects graduating into the big club and producing, such as in 2007 when Ubaldo Jimenez ranked 84th, Franklin Morales (30th) and Tulowitzki (15th) made significant contributions in the second half that pushed the team into the World Series. There are some seasons where the team achieved more success without a prospect push, such as in 1995 and 2009. Both of those seasons saw an influx of outside talent from either free agency and or trade. Larry Walker was signed as a free agent in 1995 and in 2009 Jason Hammel and Jason Marquis were added prior to the season. (Note: In 1994/95 I used the team's winning percentage to calculate wins over a 162 game season) 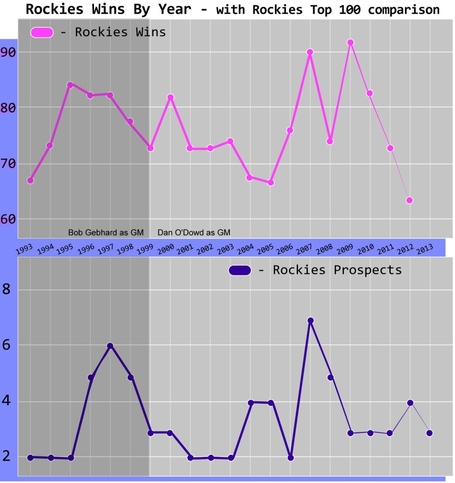 From a benchmarking standpoint the first thing that struck me was how consistent the Rockies have been in producing top level talent. At no time in the Rockies history have less than two prospects made Baseball America's list and the majority of the Rockies lifespan has included three or more prospects. In that same timeframe both the Padres and Diamondbacks had seasons where they had zero players selected for the list (2002 and 2007). Compared to the rest of the NL West the Rockies have produced better talent than it's closest rivals. The Rockies have finished the same or better than the NL West average in 14 out of 21 seasons. Except for the first three years of existence and Dan O'Dowd's first few years on the job, Colorado has stayed ahead of the curve when it comes to producing talent. 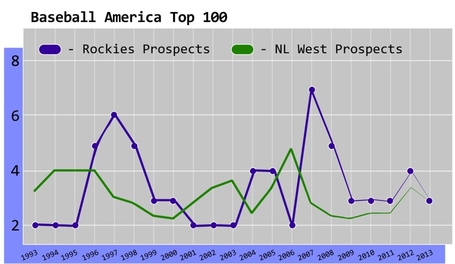 Every team has produced peak years, such as in 2006 when the Dodgers assembled nine players on the list including future all-stars: Matt Kemp, Andre Ethier, Russell Martin and Chad Billingsley. There could have been 10, because James Loney made it in 2005 and 07, but was inexplicably left off in between. The Padres peaked in 2002 when Sean Burroughs and Jake Peavy led a farm that ranked seven players on the list. This led to a drought however where the Padres produced two or less prospects in six consecutive seasons from 2004-09. The Diamondbacks also had a couple of peak seasons in 2006-07 when Justin Upton and Carlos Gonzalez headlined a class of seven and then six appearances on the list. 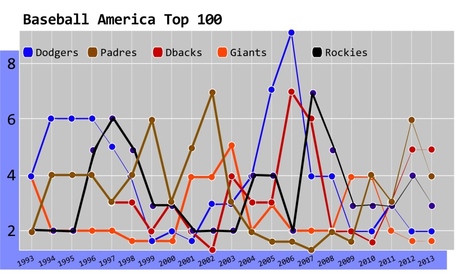 After studying these findings I have to conclude the Rockies have done better than their contemporaries in producing top level talent from the farm. Whether it was through the draft, international signings or development, the Rockies have done a fairly good job when graded by the standard of Baseball America. Even looking at the current roster construction there could be 8 of 9 homegrown starters on Opening Day and every one but Josh Rutledge has been on BA's Top 100. By these results the Rockies are fulfilling the front office's strategy of build-from-within.

So then, why haven't the Rockies made the playoffs more often? If this were the primary factor for attaining success, then the Giants wouldn't have won the World Series twice in the past three years. The Giant's farm has been one of the worst in the NL West over the past 10 years, and yet they have more rings.

Perhaps the data I'm looking at isn't telling the whole story. There are some limitations on this process, such as: arbitrarily limiting the list to 100 players may miss on prospects who succeed without top accolades. Also, perhaps the actual rankings need to be taken into account and calculated. There could be a big difference between, say a top 10 prospects, versus a player who just barely squeaks in ranked in the 90's. In addition, there are years when players are rushed to the majors and miss staying on the list. So what do you as the reader think is the biggest contributor to success in the major leagues? Are top prospects that important and do they have as much impact as free agent signings or other acquisitions?

This is what I have to deal with @chuck_nazty twitter.com/JstyleP/status…

Love my work place and this pic doesnt even do our complex justice! ⚾ ☀ #SpringTraining2013 #Colorado… instagr.am/p/VpitMuvIoc/